After residents along Arundel Avenue Millswood have had to fight and still are for a return to the privacy they once enjoyed from idling trains on the Belair line we now find residents further up the line have a similar concern.

With the re-opening of Millswood Rail Station and the removal of vegetation the same issue is now challenging their neighbours further south, those whose houses front the Millswood Station.

Emmie Dowling has a storey in the Eastern Courier concerning this latest development.

This is a timely reminder that there are still a number of outstanding issues on both this and the Seaford lines which the Government & DPTI have yet to address.

Emmie’s article suggests that DPTI will be addressing this issue. Those waiting for resolutions elsewhere along both lines will watch this with interest. As you are no doubt aware, DPTI will soon be reopening Millswood station. As part of the project, DPTI is seeking community feedback on a proposed Belair train timetable.

Yes! DPTI is looking for your feedback before looking at the time table as a result of re-opening the Millswood Station.
This is your chance to influence the service you and your neighbours have been pushing to get back. I encourage you to take it up – be part of the solution.
Please refer to the attached flyer for more information on ‘how to provide your feedback’. The flyer will also be displayed at the  Council office ‘front counter’, Unley website and at the library alerting community if they wish to provide feedback. 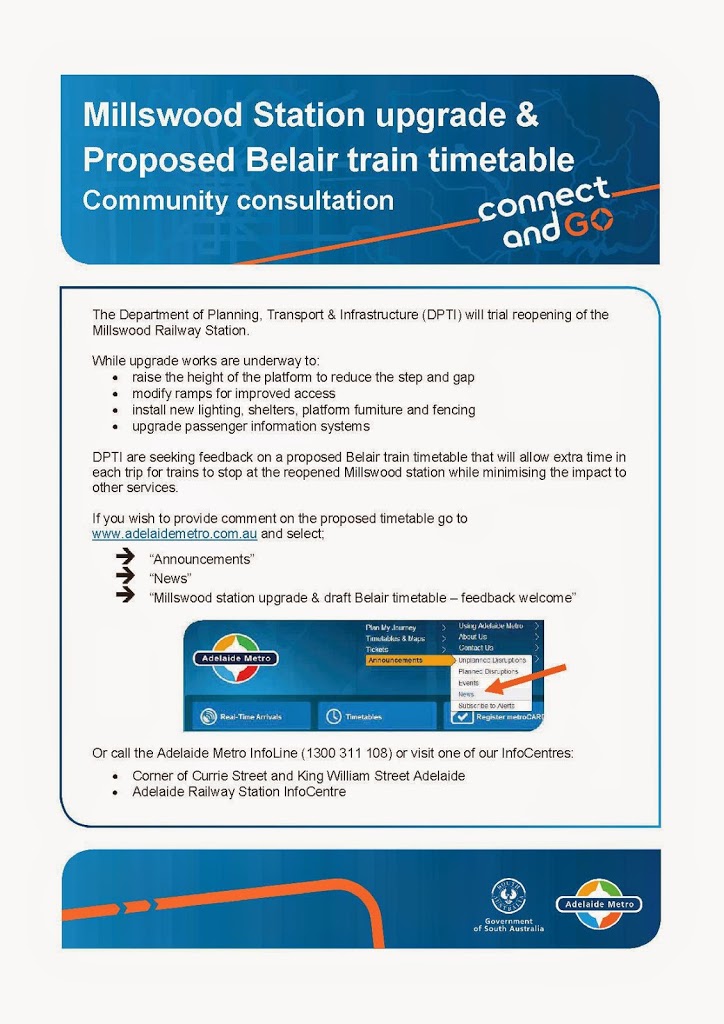 There can be only one real confirmation that this is going to happen and that is seeing work undertaken to permit it to happen. Well that is about to occur so there is no longer an argument about it.

The State Government Transport Services Division is sending letters today to residents surrounding the Millswood Station to confirm work will commence as soon as this coming Monday, 30th June.

Some preliminary works have been undertaken in recent weeks, including vegetation clearance
ahead of the start of upgrade works to commence next week.

The $500,000 upgrade works will include raising the height of the platform to reduce the step and
gap, including ramp modifications for improved access, new lighting, shelters, platform furniture,
voice annunciator, platform fencing and electrical works.

Following the successful completion of these works, the Department for Planning, Transport and
Infrastructure (DPTI) expects to begin the commencement of rail services at Millswood Station on a
trial basis later this year.

Residents are being advised that during the works, they may hear sounds from heavy rail equipment and machinery. Heavy vehicles will be accessing the site via Vardon Terrace and traffic management will be in place as required.

In order to complete these works safely and efficiently, it will be necessary for some work to occur
during the night to avoid closure of passenger train services. Further advice will be provided as it
becomes available.

Great news indeed and this should put an end to the continuing doubt that has existed. Of course, as I have suggested before, this success of this trial rests with us. Use it or lose it will be the catch cry I guess.

For some reason confirmation by the Government, including the Premier a while back there remains unbelief that the temporary re-opening of Millswood Rail Station will occur.

This is repeated in an article in the Eastern Courier this week. Even though initial contact with the department responsible for this (my old friends, DPTI) were unaware of it they have subsequently confirmed it will happen, just not as quick as the Government had promised.

Talking to people last night as I hand delivered our current newsletter in the section of Millswood west of Goodwood Road I received comment that indicated it will be used, and used well. By those living west of Goodwood Road. If this is true it will not be a temporary re-opening.

The resident profile of this area is fast becoming a young family demographic and they will likely prefer the train to the car to get into the city.

Well I know this much, the ailing footbridge over Goodwood Road giving us back safe access to the Station will be ready before the station is reopened with work under way to remove the Concrete Cancer completed.

Subsequent to my blog post about the Millswood Station and how the Libs stuffed up the word in the media was that Labor were going to renege on their promise.

Steph Key has personally confirmed to me that it will be opening.

Just prior to the Government going into Caretaker Mode Minister Fox issued a press release indicating we have scored an early victory over a previous non negotiable to re-establish the Millswood Railway Station.

A copy of her press release follows:

Belair rail services will return to Millswood station from 1 July for a 12-month trial.
Minister for Transport Services Chloë Fox said the trial will gauge the support for a reopened
station.

“Millswood was closed by the former Liberal Government as part of the rationalisation of
services when the Belair passenger line was reduced to a single track.

“This trial will determine whether rail services can now be permanently reinstated.

“During the 12-month trial, Adelaide Metro will gather patronage figures to determine whether
there is sufficient support for a permanent reopening of the station.

“The Belair timetable, which is being revised to include the recently completed Showgrounds
station, will also be updated from July to take into account departures from Millswood.

“The decision to trial the resumption of services follows strong representations by Steph Key
MP, the Member for Ashford.

“Ms Key has argued forcefully that the local community supports a resumption of rail services.
“As part of the trial, $400,000 raised through the Transport Development Levy will be invested
to upgrade the old station so that it is safe and disability access compliant.”

Ms Key welcomed the Government’s decision. “I have worked with the local community for the
past 10 years to have this station reopened,” she said.

“The reopening of the Millswood station is a fantastic opportunity for local residents and
members of the Reopen Millswood Station Action Group to show their support for rail services.
“The State Government has demonstrated its support for the Belair line through recent track
upgrades and the construction of the new Showgrounds station.

“I am confident that people in the Millswood and Kings Park area will embrace this trial and
provide a convincing argument for retaining this service well beyond 2015.”

After nearly 20 years out of service, significant work is required to bring the platform up to
current standards for passenger rail stations. This extensive work includes providing disability
access and ensuring it is safe for commuters, which will take a few months to complete.