Unley not fairing well with Credibility, Transparency and Trust.

Credibility, Transparency and Trust are probably the most important ingredients of good government. And right now in the Goodwood South Ward the City of Unley is struggling with all three.

It hurts me to say this as I have always felt, long before I became a Ward Councillor 3 years ago, that Unley is one of the better councils. I still do mind you but as a member of that organisation I am being challenged however with this paradigm.
Unfortunately our credibility will always be challenged when people perceive we are responsible for matters that the state government or other government institutions are getting wrong. Guilty by association as it were. Lets face it we are all government aren’t we.
There has been much of that in the last year, courtesy of the rail revitalization project. We have been inundated with claims by DPTI that Council is responsible for this, Council is responsible for that; or Council approved this, or (more recently) Council staff approved this. Jennie & I have been fighting to maintain our credibility in the face of what seemed an unending barrage by DPTI deflecting their competencies toward council.
That is not the purpose of this blog however.
Council don’t need DPTI to look foolish, we can do that all by ourself. I can think of many things in my 3 years as a Councillor, including the Kelvin Avenue consultation that impacted on Goodwood South residents.
Ironically we have not made a good fist of things in one of the very areas that have created angst and mistrust by DPTI, the area of Canterbury Terrace Black Forest. We have had three overlapping consultation projects going on concerning these residents (and a small section of Byron Road).

First was an LATM (which I have posted on previously and will again soon), followed by seeking opinions on the future of the Canterbury Terrace, Parker Terrace Trees which were dying or dead. And then finally a consultation about re configuring Canterbury Terrace due to the impact on increased use by bike riders due to the construction by DPTI of the Greenways bike path.

It has culminated this week with Council chopping down a tree in the Princess Margaret Playground that DPTI had twice attempted to late last year because it interfered with their infrastructure. In spite of removal having State Government Development Assessment Commission approval I was able to save the tree because it clearly had no impact on the electrification of the rail corridor. You can read about this in previous posts on this blog site.

Unfortunately Council later attempted to remove the tree and again I was able to put a stop on it as due process demanded we go through a local development assessment process. This was agreed to by our management. Councils arborist had recommended its removal after inspecting it as part of the DPTI scene previously noted. He found the tree to no long be stable and to be structurally unsound and therefore unsafe.

We proceeded with the development assessment process, sending out invitations as required under the Act to people owning property within 60 metres of the playground who may wish to make a representation on the removal. This letter went out on 6 January, received by me as one of those residents early this week. We had until 21st January to make the representation.

To my utter amazement we (yes WE, Council) came in yesterday and DOWN she came. So we send out invitations to people to provide their input and assist the decision making process but ignore this and chop it down any way.

So what is a guy, sorry an elected member, to do about this. I cant get the tree back, but by golly I can challenge our CEO and our General managers as to how we can allow this to happen. An administration acutely aware of the devastation that the people of this immediate neighbourhood have felt at the hands of DPTI, and to a lesser extent by ourselves. and acutely aware of how sensitive these people are towards this tree, allowed this to happen the way it did.

Our administration were well aware of my campaign to save the tree from the DPTI marauders. Management agreed with me that, even if this tree was suffering, that we should avoid doing anything to it for two years because this neighbourhood had suffered too much loss already.

Our arborist’s concerns outweighed this however and I agreed to allow it to go through a development assessment process to ensure full transparency. Hence the letters to neighbours within 60 metres.

At the end of the day, with the information I now have, the tree was never going to survive the process. It was so severely compromised it appears it presented an immediate danger to the kids in the playground, and I am not going to argue this with our arborist.

Section 54 of the Development Act 1993 allows for immediate removal of a significant tree in this circumstance and with a retrospective approval to follow. This is what finally happened here but to happen in the face of it going through the process of an approval just smacks of ineptitude in the eyes of a public sympathetic to the tree, and a public licking its wounds from the previous 12 months of DPTI activity and having now a level of mistrust for anything government.

Thank you also to those encouraging me to stick at this and concerned for me that I should have to.

Our contractor and their heritage advisor have advise the replacement concrete beams need to be cured for a further 14 days to ensure they are perfect to be installed and as such, installation will now occur during the latter part of October.
Anyone wishing to use the park next week can now so do. The repair the Arbour has commenced being the westilai vine has been cut back, the new concrete beams are being manufactured and are to be installed by end of September. 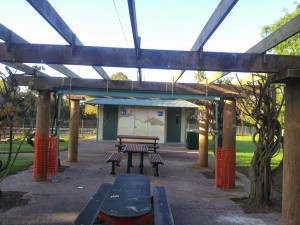 Admin advised at a briefing on ward matters last Thursday that they are planning is to close the park during the week of 30 Sept to install the new concrete structure.

If you have any parties planned during this week I suggest you contact the council to confirm if access is available for that day and time.

It has always been a great playground, going back to when my mother in law was a voluntary playground supervisor. And now even better for those who use it, and many do…one of the more popular playgrounds in the wider Adelaide reach. The upgrade of the Princess Margaret Playground has been completed and my family celebrated with a baptism party. The upgrade includes the installation of a BBQ which was an election promise I have pursued.

The playground is one of the smallest in the wider metropolitan area of Adelaide but is is one of the most used. Tucked away from main roads this playground is the envy of most. And yet, as with all things today, it needed upgrading.
With our greater understanding of safety issues, the needs of children, and with improved product technology, playgrounds around the world have been undergoing change. princess Margaret has joined this change and the end result is it looks great.
I am pleased to report that, as part of the upgrade process, we have been able to provide the BBQ facilities that I have championed since asked during the election campaign in 2010 to pursue.
My own family had the privilege of taking advantage of the upgrade as we celebrated our youngest grand daughter’s baptism today. 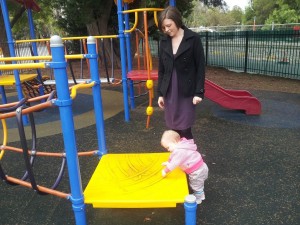 The playground has more work to finish it however. The heritage listed arbour needs restoring and this will occur shortly.  And I noticed today we already have some maintenance to do. The entrance gate is no self latching right now. That clearly needs fixing and there is some broken beer bottle glass that needs removing.

If you are wondering what is happening about repairs to the Arbour at Princess Margaret Playground we have been awaiting a report on its historical significance first, noting that the measures reportde on at the beginning of last month at least have made it safe.

I can say that we have uncovered evidence of it’s historical significance and as a result we will investigating repairs that be sympathetic to this. Once this is done we will cal tenders for repair works.

By the way. We have saught with the Minister of Planning to have it added to our list of Local Heritage Places.

A quick note to let everyone who uses the Princess Margaret Playground that the temporary works to make the structure safe for ongoing use commenced today. We had hoped to have it available for the weekend but unfortunately it will be Monday before we can achieve that.

I have just received news that the damage is extensive and a major. Repairs are likely to be expensive and approval the required from council as it is not included in our budget.

This therefore may take some time to be completed.

Temporary engineer designed propping will be provided in the meantime to allow the park to remain open and usable. Once done it will be safe for everyone to still use the park.

I have asked our depot if this can be done before the weekend. While Council awaits the results of the survey mentioned in my last blog the Playground is in the news for a different reason.

Having been alerted that there is structural cracking in the concrete cross beams that support the shade structure and vines within Princess Margaret Playground and being a building inspector I have been around to check it for myself. 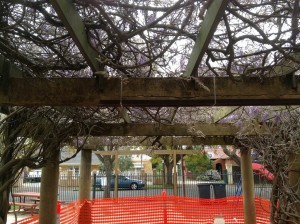 There is evidence of concrete cancer in one beam. The reinforcing in the beam is probably rusting and it is likely that repairs will be needed. Whilst it has been reinforced by external steel angles it is appropriate that the area be bunted off preventing public access.

We hope to have advice early next week in relation to repairs and timeliness and will keep you informed accordingly..

Princess Margaret Playground. Have your say.

You have a chance to influence what we do. Just go to this website and Respond to the questionairre.

For instance if you feel a barbecue would be a good idea let us know.