The Unley Road Association (URA) has recently announced the return of ‘An Evening Under the Stars’ for February 1, 2014.

This free community event run by the URA will once again take place in the Unley Memorial Gardens with live entertainment delivered for the enjoyment of the public.  It is the highlight of the ‘Taste of Unley’ two-week promotional campaign epitomising the essence that is Unley Road and presenting the best the street has to offer. Commencing January 24, 2014, competitions, discounts and various other promotional activities will be rolled out in the shopping and business precinct for the benefit of the wider community. 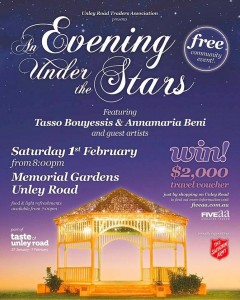 Stephen Finos, Event Organiser (URA), believes the ‘Taste of Unley Road’ campaign is crucial in reminding South Australians of the importance of supporting our local businesses.
“Our specialty shops and business service providers offer an unparalleled consumer experience and we look forward to once again seeing the traders of Unley Road unite to showcase the magnificent shopping precinct to which they belong,” he said.
Following the success of the inaugural event earlier this year it was undoubtedly a must have to complement next year’s promotional period.
“This year’s concert saw a turnout of over 700 people and it is expected that next year’s will bring even higher figures with plenty of fun and excitement in store for the whole community,” said Mr Finos.
It has been announced that the 2014 line-up will see the return of Adelaide’s own outstanding singing duo Tasso Bouyessis and Annamaria Beni. Several supporting artists will accompany them, providing dazzling entertainment for young and old.
The Salvation Army has proudly been revealed as the major charity for ‘An Evening Under the Stars’ 2014. The URA is delighted to have the opportunity to thank the Salvation Army for their ongoing support as a vital component of the neighbourhood.
Coincidentally, The Salvation Army is celebrating 130 years supporting the Unley community. Attendees will have the opportunity to give back to this wonderful charity through donations and various giveaways. The concert will also be supplemented by a sausage sizzle run by The Salvation Army, raising funds for the Unley sector of the organisation.
The Unley Road Association is working tirelessly to connect local businesses with their community, providing new and exciting mutually beneficial opportunities for all. ‘An Evening Under the Stars’ 2014 is sure to impress and is an event not to be missed.
Don Palmer


Congestion Charges: Who should you believe