After the dramatic interruption to Canterbury and Parker Terraces during the recent State Government Rail Revitalisation project we now have seen the final touches put to these streets.

And the result, as far as this elected member/resident is concerned the end result is good. 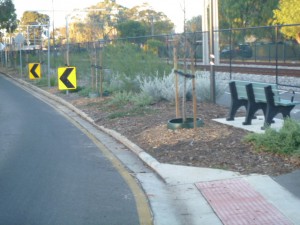 While I was away in Darwin the last of the trees were planted. This was at the southern end of Canterbury Terrace where there was planned to be some street art that was not received favourably by those impacted the most. These trees are the same age as those originally planted, having been nurtured in the nursery.

The vegetation along these two streets have been well looked after by our depot staff. The growth over the last season and the planting of the new trees has transformed this area. It is looking great as a result. It is visually a vast improvement on what was there originally notwithstanding the loss of  some significant trees down Canterbury.

As these trees grow we can look forward to an even more  pleasant streetscape.

We have also seen the installation of a park bench and street signs for both streets at the East Avenue end. 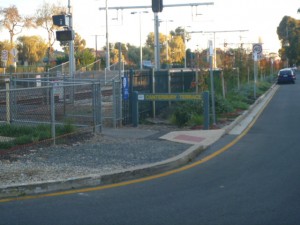 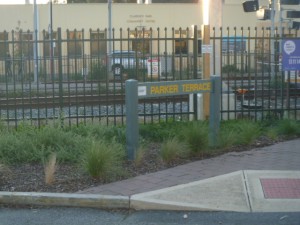 Just to ensure all remains well I noticed one of our  depot staff bringing in more bark.

Arundel Avenue along the Belair line rework has I understand just been completed and next week we will see replanting in Cromer Parade. This replanting has been necessary as the outside contractors did not look after the original plantings like our staff did on Canterbury & Parker.

Watch out too for some new landscaping adjacent the path between Arundel Street and Victoria Street. The land has been cleared already in preparation of landscaping with I understand at least one tree being planted with the capacity to become significant.