Is the Gourmet Gala too expensive to run?

Should we disassociate ourselves from future TDU’s. I ask everyone a separate question. Is it the TDU you have a concern with or the Gourmet Gala with its cost of $ 266,000 per event? 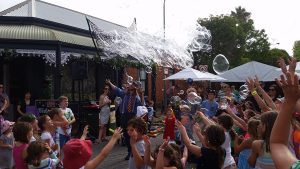 The Gourmet Gala is held the night before a stage start for the TDU. It certainly does compliment the race start the next morning, making for an extended celebration.

But again, is it the TDU?

The Gala does require an investment by council of some $ 266,000 to stage. This is a significant investment.

But is it? It is actually in the order of just $ 10.00 for every rate payer, whether residential or commercial.

Some see this as focused on an elite group, others just a big party that we can do without. Others, a party we could hold at another time, at another venue, at far less cost than $ 266,000. A solid argument.

If it is all about party time in Unley we certainly can look at doing it at less cost. The Unley Way to go held many moons ago on Unley Oval is evidence of this.

The gourmet gala many do not realise goes well beyond this however.

The Gourmet Gala attracts people from within and from outside to King William Road as a destination. Up to 30,000 at a time which is far from an elite group.

This, in turn, must be economically good for business in King William Road. We are told by qualified experts that it has provided an economic benefit to the strip of over $ 5.0m to the City of Unley between 2011 and 2017. An average of close to $ 730,000 per event.

Some traders disagree, losing money on the night. These traders I suggest do not see the marketing potential of such an event. That is a debate however for another time.

The above is far from an argument justifying the Gourmet Gala.

There is much more to consider as we consider any future commitment to the Gala. This conversation I think needs to expand into at least a 4th post just to explore alternatives to the Gala.

So watch this space. 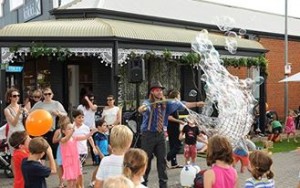 Will you be joining Adelaide’s foodies, fashion-forward, wine lovers and cycling enthusiasts as they descend on King William Road for the annual Unley Gourmet Gala on Tuesday, January 19, 2016.

The King William Road Unley Street party is one of Adelaide’s most prestigious community events. Known as the Unley Gourmet Gala it is as exciting an outdoor gourmet experience you could enjoy, showcasing some of South Australia’s finest food, wine, fashion, music and entertainment.
The event, now in its sixteenth year, will be held on the eve of Unley’s Stage 2 Start of the Santos Tour Down Under and is expected to attract thousands of locals as well as visitors from all over South Australia and interstate.

The free family-friendly event will feature cooking demonstrations by Justine Schofield from Network Ten’s Everyday Gourmet and Masterchef, fun children’s activities and an impressive line-up of musicians and other entertainers such as the amazing Mini Bike Stunt Team and bands Alphabette and Funk Latin Union.

King William Road will be lined with an array of gourmet food stalls offering a variety of cuisines, with wines from Wirra Wirra and Tomich Wines and beer by Vale Brewing. At the Porsche Fashion Stage, clothing and accessories will be showcased from King William Road’s premier fashion designers and retailers. Featured boutiques will include Liza Emanuele, Denim + Cloth, Designer Exchange and Denim Iniquity.

The Unley Gourmet Gala will be held on Tuesday, January 19, from 4pm-10pm. Come along and be one of the many who enjoy this fabulous Unley event.

The Stage 2 Start of the Santos Tour Down Under will be held on King William Road at the Opey Avenue intersection on Wednesday, January 20, at 11am.

If you have not heard yet the City of Unley has been successful yet again with the announcement that the TDU 2016 Stage 2 goes again to Unley.

The flag will fall at 11.00 am on Wednesday the 20th January as the bike riders embark on a TDU 2016 stage 2 start journey of 132 km  through the Adelaide Hills on their way to a finish at Stirling. Checkoutthe route map on the Santos TDU website.

And I can tell you also that our ever popular Gourmet Gala event will be in the night before. A combination that is recognised around the country. A combination that promnotes Unley as an event specialist and promotes also our premier shopping strip.

Mark both events in your calendar and watch this space for more news.

And now…..down to the hard work of making it all happen.

I attempted to portray what the Gourmet Gala was like in my blog post back on 23 January.

This YouTube video clip does it way more justice.

The crowd at this year’s Unley Gourmet Gala 2015 has been reported as a whopping 30,000-plus.This is a massive 5o% increase on last year’s Tour Down Under Gourmet Gala.

The City of Unley has now staged this event on King William Road for 15  years. With this much experience we have clearly got it right and are the envy of the Tour Down Under participants.

I must say I was surprised that the attendance was 50% greater than we have previously experienced because each time I walked the street there was room to move. I remember times when you could not move. Looks like we have got it so right that there is room to move and enough room to allow 50% more people to experience what is a premier event.

Borrowing some thoughts for fellow Councillor Mike Hudson here are some highlights:

The weather was great.

The entertainment was fabulous.

The eateries did mega business.

Everyone was very well-behaved

I offer congratulations to everyone who helped make this the success it clearly was including the businesses who sponsored the event, the council management and staff who are responsible for the logistics and marketing of the event, the performers who entertained the masses and restaurant, cafe owners and service clubs who wined and dined us.

To get a feel of what was on offer check out my Facebook page for a pictorial portrayal of the night. My favourite pictured below (as I believe was the younger citizens and older citizens alike favourite) was the Bubble man. Check out also the photos I posted of the following mornings stage 2 Tour Down Under 2015 race start.