Students Discover Family Heroes of the Past at the Unley Museum

The following is the transcript of a press release Council is issuing this week.

The City of Unley is encouraging school groups and families to visit the Unley Museum to learn about the area’s history and perhaps discover some of their own.

“On a recent visit by St John’s Lutheran School a student was amazed to discover the name of a long-lost relative on the Sturt Football Club Honour roll. It’s wonderful to see people, especially children, uncovering part of their own family history,” Ms Paris said.

Housed in a former fire station built in 1898, the Museum’s temporary exhibition program and permanent collection has more than 12,000 objects.

Visitors to the museum can also compare their lives and contemporary technology to now defunct technology and life on the home front during World War I through the museum’s At Home, In War: Unley 1914-1918 exhibition.

The exhibition commemorates the World War I Centenary by focusing on the lives of local residents back in Australia while war was waging.  Developed in line with Australian Curriculum the exhibition provides students with an interactive way for students to engage with history.

City of Unley Mayor Lachlan Clyne said the museum was an important interactive and educational resource for Unley residents young and old.

“The Museum’s education program works in parallel with the Australian History Curriculum but makes learning fun by incorporating games, treasure hunts and even a walking trail of the local area with stories of local heroes,” Mayor Clyne said.

The Unley Museum is additionally an accredited Learning Destination with the Australian’s Children University and offers year round learning activities during Museum opening hours.

At Home In War

At Home in War is the first of a series of events that will be put on by the Unley Library and the City of Unley in the near future commemorating the 100th anniversary of the first world war as announced by Mayor Lachlan Clyne.

The City of Unley has a strong historical link to this war having lost over 30% of those from Unley who served. Unley was not alone of course. Australia indeed had the highest level of loss of life of all the countries to serve in this theatre of war.

The exhibition focuses on life back home while our young men and women went oversees halfway around the word to fight for freedom. The exhibition was opened by former Governor of SA Rear Admiral The Honourable Kevin Scarce. Held under a marquee in the village green this would be close to if not the best attended opening of the Museum I have attended since being on Council.

It has been superbly put together  under the leadership of Curator Elizabeth Hartnell by the volunteers at the Museum and they should be proud of what they have achieved. Many a storey is told in the exhibition re-creating what it was like at home in war 100 years ago.

As I stood in front of the honour boards included in the exhibition and reflected on the grief and distress that would have been the prominent emotion of the day Reno Elms of Salvation Army Fame exchanged thoughts along similar lines. We recognised how families and communities across Australia were so devastated with the senseless loss of life of that era.

Amazingly as I wrote that last paragraph (in the courtyard of the Church of St Augustine, adjacent the village green plaza) I was met by a man arriving early to participate in another event, the annual candle light memorial service at the Church for the victims of homicide. This in a graphic way bought home the grief of the loss of young people taken from us by man’s inhumanity toward man as he struggled with the loss of his 23 year old son, a murder victim.

A day where I wearing two hats, as a Councillor of the City of Unley and a Warden of St Augustine’s, got the opportunity to recognize and empathize with those who have lost.

Back to the Museum. I encourage you to take the opportunity to check out this exhibition. The Unley museum is located at the Old Unley Fire Station, 80 Edmund Avenue. It can be accessed from the Village Green.

Purchasing Heywood Park: £1 at a time

Heywood Park, one of the City of Unley’s largest and most-loved green spaces almost did not exist. It came into being only through the inspired leadership of then mayor of Unley, William Harold Langham.

This storey is the feature of the current exhibition at the Unley Museum.
Called Purchasing Heywood Park: £1 at a time, this exhibition traces the race during the 1900s to raise funds and secure this valuable open space.
Had it not been for Mayor Langham, Unley residents may have never attained this popular picnic spot. It was a widely discussed and debated issue with heated letters appearing in the newspapers and disgruntlement within Council.
As current Unley Museum Curator Elizabeth Hartnell, says “as it captured the public’s imagination in 1920, the story continues to resonate with local residents today”.
After rate payers voted against the purchase, Mayor Langham rallied the people of Unley and others around the State to donate to a subscription fund. Public support was such that £4,000 was received in 4 days. Donations ranged from 5 shillings to 500 pounds ($12 to $25,000 in today’s money). As a result, Heywood Park became a ‘people’s park’ opening in 1921 with 9,000 people crowded under its gum trees.
“Purchasing Heywood Parkis an exhibition about the passion of a Mayor, those who fought for a people’s park and the 230 donations made. The exhibit displays photographs of Heywood Park as it was in the early 1900s, original hand written notes of encouragement and support that accompanied donations, and follows the heated and at times bitter debate among Councilors as reprinted in the daily press. Visitors can check the alphabetical list of donors to see if their family was one of them.” Ms Hartnell says.
Purchasing Heywood Park is on display at the Unley Museum from now until 24 September 2014.
Unley Museum
80 Edmund Avenue, Unley
Open Monday to Wednesday 10.00am – 4.00pm, Sunday 1.30 – 4.30pm.
Closed on public holidays.  Admission is free.
For more information call (08) 8372 5117 or go to www.unley.sa.gov.au/museum

Loved toys from another age show the state of play

I posted last month in this blog a storey about the Unley Museum’s latest exhibition Toy Storey. Well it has had some press coverage in the Advertiser by Sophie Perrie, which I reproduce below for those who may have missed it. A great storey and a reminder to get along to check it out.

THESE are toys with stories to tell.

A collection of 50 toys, animals, dolls and miniature items from the 192 Os to the 2000s are on display at
Unley Museum for its Toy Stories exhibition.

The toys, which have come from the museum collection and three private collectors, include an old Monopoly board from the ’30s, a wicker pram made in Unley in the ’20s and a stuffed toy dog, also
from the ‘2Os.

“It’s the cutest, most loved thing,” she says. “It was found in the attic of the orphanage when it was closed; you can only imagine who must have stashed it up there. “It just makes you tear up, it’s so precious.”

The exhibition also features a visual display of the top Christmas lists from previous decades. Yahtzee and hula hoops were the rage in the ‘5Os, the ’70s was all about the Rubik’s cube and Game Boy was king of the ’90s.

Ms Hartnell says it has been interesting to see how toys have evolved.

Lego, for example, was made from wood until plastic blocks were introduced around the ‘5Os.

“They introduced the block so every block could actually fit together regardless of when you bought it,” she says, “If you put a brand new piece of Lego into a ’50s piece of Lego … it would still fit.”

The exhibition has proved to be a way to connect older and younger generations. “It has been really good to have grandparents come with their grandkids and go, ‘Iremember that’, and talk about the toys and games.”

There will be a larger toy exhibition at the museum in 2016 and anyone with old or new toys with stories behind them is encouraged to bring them for the display. The Unley Museum’s newest exhibition has something for everyone. From the young in age to young at heart there are toys, toys and more toys. Over one hundred games, toys, animals, dolls and miniature items are on display. 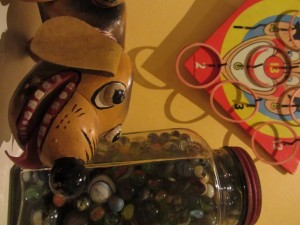 Toys can evoke imagination or imitation while drawing on the real world. Many teach physical coordination or important life skills like counting or rhythm. Some toys reflect the social and economic influences of the child’s contemporary world. Toys with all of these themes will be on display until Wednesday 18 December 2013.
Unley Museum curator, Elizabeth Hartnell, designed the exhibition into categories that describe each toys’ primary purpose. “I did not want to just have boys’ and girls’ toys because so many have been enjoyed by both genders. So I grouped this collection according to what the toys taught, not just who played with them.”
There is a visual display of the top Christmas gifts for the last hundred years as well as an original 1930s Monopoly game. Come and find out what decade was dominated by the Etch-a-Sketch, the origins of dolls and when balls first appeared as a child’s toy. 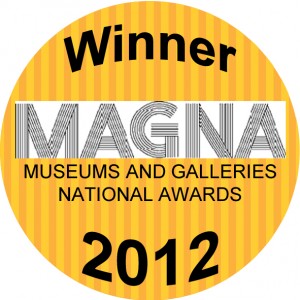 Why not try out some of the toys yourself? Indulge your inner child by pulling along a wooden replica that ‘bobbles’, or build a towering structure with our blocks and dominoes. Challenge your friends to a quick game of quoits. You also can fold a paper airplane that will soar in the sky or strike a beat with the maracas and tambourine.
Toy Stories will be on display at the Unley Museum until Wednesday 18 December 2013. Unley Museum, located at 80 Edmund Avenue, is open Monday to Wednesday from 10.00am until 4.00pm and Sunday afternoon from 1.30pm to 4.30pm. It is closed on public holidays.  Admission is free.  For more information call (08) 8372 5117 or go to www.unley.sa.gov.au/museum 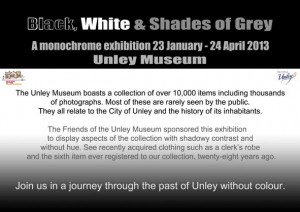 Our very own Museum won a category at the “Museums and Galleries National Conference Awards” last night for our “Gorgeous Gardens Exhibition”.

Quoting our CEO Mr Peter Tsokas
“This is an outstanding effort as we were competing against 10 other Museums and Galleries from across Australia that were nominated as finalists.
Some of the others included the likes of the Newcastle Museum and the Museum and Art Gallery of the Northern Territory.
In fact, we were the only Museum and Gallery from South Australia to win a category which is a fantastic effort and something we should all be proud of!
A huge congratulations to  Elizabeth and her team – including all the volunteers – that researched, prepared and set-up the exhibition. Their passion and commitment has made all this possible.
Well done!!”
City of UnleyDon PalmerUnleyDevelopmentClarence ParkDeputy Mayor Don PalmerMinister for PlanningDevelopment Plan AmmendmentGoodwood OvalRatesLocal GovernmentKing William RoadJohn RauBrownhill Creekrate cappingBudgetDPABadcoeUnley CentralMayor Lachlan Clyne