You may remember my blog post of 21 January last when I announced that SAYArts stepped into the breach after the collapse of Urban Myth to give the kids a second chance. 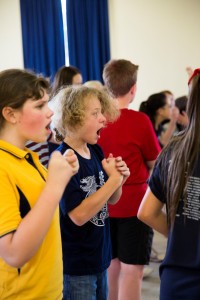 Without a ready made home St Augustine’s Anglican Church came to their rescue to provide a a venue while they got on their feet. This was a great result as far as I was concerned.

As an elected member of the City of Unley it was great to see them find a home, albeit only temporary as I indicated in that blog post.

As a Warden at the church I felt much pride in being able to assist this group find a way to get on their feet. And get on their feet they have done. All credit to Bec Pannell, Sean Riley and their dedicated team.

St Augustine’s was in a position where they could help because one of their buildings had just become vacant after the completion of a long term lease. After an exhaustive search for suitable replacement tenants they (St Augustine’s) may be on the verge of finding a new tenant. Negotiations are under way as we speak.

There may be a chance that the new tenant may be in a position to sublease the room made available to SAYArts but this is not known at this time and may not be for a few weeks yet. I am not in a position where I can influence this.

It may be therefore that SAYArts will be looking for a new home at the completion of this years second term. That is the end of June.

If you, or someone you know can help them out by providing them with space, I suggest in the order of 80 m2 let me know. I will pass on your offer to Bec.

Urban Myth have announced their 2013 Workshop Program featuring a Shakespeare production, Tech Theatre workshops, the return season of Sean Riley’s One by One, newly added adult workshops and plenty more…. this promises to be a brilliant 2013!

The following was copied from In Daily, Adelaide’s daily Independent Electronic News.

DISCUSSIONS about hope and the plight of ancient Greek goddess Elpis cast the seeds which grew into this production. How does a person preserve hope when all seems lost? What might a kidnapped girl hope for, when she’s locked alone in a room?

Director Glenn Hayden and award-winning playwright (and ex-Urban Myth member) Finnegan Kruckemeyer have created an epic tale of eight young women who each struggle in their own ways against what appear to be insurmountable challenges. They may have lived in different times and far apart, but they are all linked by a shadowy secret, and a treasured photo holds the key to their mystery connection.

The Girl Who Was 100 Girls is a play full of strong female characters, and at times it seems like a bit of a battle for prominence. The quieter moments are welcome and several extended monologues give a chance for individual talents to shine. Sophie Christie’s Sarah, grieving for her lost brother, shows strength as well as sorrow as she clings to her dream. Lauren Reid, as Melanie, the sister left behind, is exceptional. Her retelling of the moment she finally succumbed to grief is affecting and one of the play’s most successful scenes.

The Goodwood Institute, Urban Myth Theatre Company’s new home, felt just right for this show. Red velvet drapes and the exposed rafters of the old vaulted ceiling framed a stage set simply with corrugated-iron wings and a raised, rear platform – an atmospheric and adaptable design by Kerry Reid which made it easy to imagine locations ranging from 1800s Spain to the present day “somewhere”.

Vocal accompaniment from an all-ages women’s choir, led by Carol Young, leant an edginess and depth of emotion that balanced the occasionally overwrought acting. Members of the large ensemble cast all gave gutsy performances, and deserved the applause which followed the revelatory final scenes. A strong, dark, but ultimately positive piece of theatre. Yes Urban Myth have settled into their new home, at the Goodwood Institute building on Goodwood Road. A home that is a far cry from their old home in one of the cottages on the Village Green in Edmund Street, Unley.

Urban Myth Theatre Company of South Australia is an internationally award winning youth arts organisation. Established in 1981, the company has nurtured the talents and leadership skills of over 10,000 young people in Adelaide, Rural South Australia and Internationally.

Their  home at the Goodwood Institute  provides these young participants, professional practitioners and visitors a Creative Hub to explore and deliver their work. With its 212-seat theatre, 2 studios, music bar and gallery, the Goodwood is a home for the arts that South Australia can be proud.Urban Myth Theatre Company at the Goodwood Institute is more than a theatre company, it’s an international home of the performing arts.

As their artistic director Glenn Hayden told me yesteraday as he ushered me around the facility Urban Myth now can be seen as the premier Youth Arts facility, not a “cottage” industry.

Following up on my recent post on Urban Myth heading west to Goodwood I encourage you to read an article from In Daily per the following link.

Their aim….to put Goodwood on the map.

HEAD WEST Young Man was the expression 100 years ago

One of the City of Unley’s more recent success stories are heading west. The west of the City of Unley from their home of some 30 years in one of the village green cottages fronting Edmund Avenue and opposite the council offices/civic centre to the privately owner Goodwood Institute on Goodwood Road.

Over the past four years Urban Myth’s membership numbers have increased by 60%. To accommodate their growth, Urban Myth will be relocating in July 2012 from the small cottage in Edmund Avenue to the privately owned Goodwood Institute.

This is a good move in as much as there is a theatrical and entertainment link they can tap into in the west of Unley. Across the Road from the Capri Cinema, down the road from the Wayville Showgrounds they will be a good fit in this precinct. Good to see someone from the other side of King William Road see the benefits of residing in the west of our City of Villages.

Council will decide this month whether it will be supporting the move by continuing to subsidise their activities, to the tune of possibly $ 5,000.00 per annum.

For more information follow this link to an article written in Adelaide Now http://www.adelaidenow.com.au/entertainment/urban-myth-set-to-be-revitalised/story-e6fredpu-1226389591634?from=public_rss