It’s here whether you like it or not. Cycling on Footpaths will be Council’s Cycling Conundrum courtesy of our “well researched” State Government.

You have all heard about this one, it is the hottest topic in town right now; the Governments Cycling legislation bought in outside of Parliament by regulation. What does this mean to Councils and in particular the City of Unley.

Unley has a reputation I believe of being a bike friendly City. We have and continue to grow a network of bicycle friendly routes. Our bike friendly tracks interact with Government tracks in the Mike Turtur Bike-way along the tram corridor and the recently constructed Greenways along the Seaford Rail Corridor.

As we speak we continue to look at ways of increasing and/or improving the pathways to allow our numerous bike riders and indeed those from outside our city to navigate through our city.

The Governments (what I suggest is ill conceived) allowing of bike riders of all ages to use the footpaths has the potential to undermine this council’s reputation. They have by their regulations shown themselves to be a champion of bike riders. In doing so they have paid no attention at all to the problems and challenges that this may place on local government.

I personally heard the minister when he first announced on talk back radio that pedestrians injured by cyclists can sue the Local Council for compensation for any injures sustained. 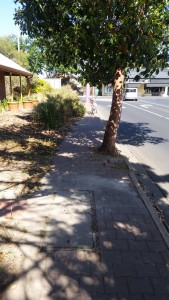 Thankfully the bike in the background is stationary

A big percentage, if not the majority, of footpaths I suggest in the City of Unley simply are not suitable for bike riding. Many are too narrow, some being 600 mm of less in width. Many are compromised by our much loved and much hated street trees, making travelling along footpaths I imagine as difficult at best for bike riders. As is the case with most inner suburban streets the front yards of our properties are fenced with high vision restrictive fences.

If we at Council hold this as true then it would appear we will have to create by-laws prohibiting cyclists from using footpaths designated by us as unsuitable. Failure to do this would likely see us being capable of being sued for negligence in not protecting our citizens. 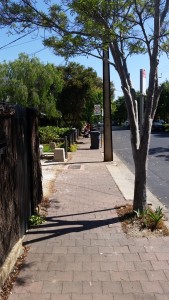 Grandma and child approaching. Who gives way at bin.

Up go our premiums and up go your rates and down goes our reputation of being cycle friendly. A plethora of new signage to add to the clutter of road signs we already have.

Having said that I would be surprised to see cyclists considering riding along many of our footpaths because they themselves will see the folly. But common law will place the onus on us, not the rider, to determine if a footpath is safe.

We at Unley Council, and the LGA on our behalf, are lobbying the government hard to determine how we best deal with this or (touch wood) get the government to see sense and restrict or remove the regulations that precipitates this dilemma.