Councils – the lean machine as promoted by the LGA

Councils – the lean machine: that is the catch phrase for a new publicity program being put out by the Local Government Association (LGA).

In the early days of this blog site I started a similar series albeit, with apologies, not completed. With the recent threat by the opposition to cap Council rates when in Government. With the State Government imposing extra exorbitant taxes through us. With Marion seeking to withdraw from the Association.

Now we see the LGA seeing the need to remind us all what Councils do provide the tax payers of this country.

Below is a media release last week by the LGA titled Councils – the lean machine I trust you will find informative. You may have experienced already the start of this campaign. 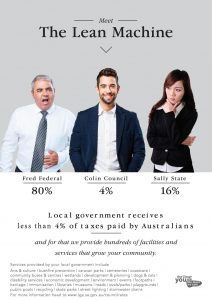 and infrastructure councils provide to their communities, while taking less than 4% of

2016/17, it was important for ratepayers to know what they are getting for their money.

“Councils in South Australia manage around $22 billion worth of infrastructure, while

providing hundreds of services and facilities in their communities,” Mr Pinnegar said.

“The days of the three R’s – roads, rates and rubbish – are long gone. The State

Government is giving us more to do, and our communities are telling us they want and

expect more, so councils are stepping in to meet these needs.”

Other council facilities and services can include caravan parks, cemeteries, coastal care,

services while taking less than 4% of the nation’s tax.

“80% of all tax paid in Australia goes to the Federal Government, and 16% of it goes to the

especially with more and more State Government taxes being included in council rates.

“The NRM Levy is an obvious example, and is clearly listed on rates notices, but there are

others, such as the rapidly escalating Solid Waste Levy, Rubble Royalties, and Community

Housing rebates, which are all paid by councils and ultimately their ratepayers.

“What people may not realise is that in South Australia, councils receive the lowest funding

per capita of anywhere in Australia, the least amount of grants from their State Government,

and an unfair share of local road funding from the Federal Government.

Hoping this helps all understand the role of Councils – the lean machine.