With the rail revitalisation projects seemingly finished – well not really – residents continue to be confused by comments from DPTI staff that contradict previous undertakings. And of course the standard trick used from day 1 to confound … they are still blaming or duck shoving it to council.

It is no wonder there is an anti DPTI sentiment out there.

I have to say I have had a gut full representing residents in the negotiations and unfortunately their fights with DPTI on the group of rail projects in my suburb. This is a state government project, always has been. DPTI is a state government department.
And yet DPTI keep blaming Council for their stuff ups and misgivings. And residents feel, rightly or wrongly, that their only course of action they have is to seek the help of their local government representatives.
There has been a long drawn out fight along the greenways bike path in Black Forest with admissions and then denials from DPTI. They argued for months that they were not responsible for replacing residents fences backing onto the bike path, except where the works has damaged the fences or caused privacy to be lost.
The argument was if they did this there they would have to do it along the whole 32 km length of the rail corridor. Wrong the bike path is not the rail corridor it is a unique stretch of land that does not set a precedent for the rail corridor. And the fences in this area fitted both criteria they indictated warranted action on thir part.
Continued pressure from residents in this area have seen DPTI finally relent and provide new fences to 4 of houses. Why. Because they were caught out by the fact that they had lifted the finished levels in this location by some 400 mm, meaning the fences now had to retain filling, which they did not have to before and which is illegal. 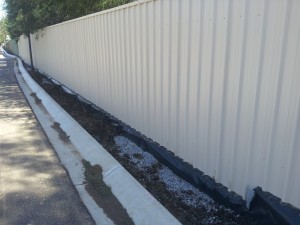 Picture of fence done, complete with retaining wall under (covered with plastic)
Of course this was only after intervention from above, I think from CEO Rod Hook. And as part of that process retaining walls were placed under the fences.
That means they gave the commitment. And they gave it as I understand it, and according to the residents involved, to all of them.
But guess what. There are three other houses in this strip with the same problem. Did they get a retaining wall. No! Did they receive the same undertakings. Yes! 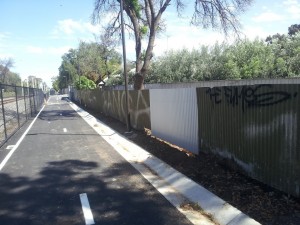 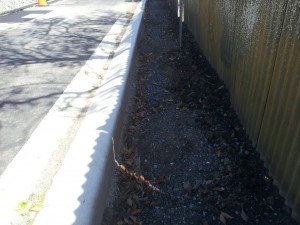 Pictures of fences not included
(showing depth of fill to be retained, and the low (non privacy height))
Why. I don’t know!
I wonder if it is because these residents did not voice their concerns loudly enough. Surely Not. Well maybe? Why else would DPTI do 4 and leave the other 3.
And what is the response one of these residents received in the last couple of days from ringing the DPTI 1800 number to find out why. “Council is doing the landscaping, not DPTI so go and ask them.”
If I had $100.00 for very time I have heard that spoken in the last 9 months starting with “Council will be building the Greenways bike path” (and that from one of their senior project managers) I would be a rich man. In hindsight perhaps we should have offered.
This means of course that DPTI is responsible for 4 and council 3. I ask DPTI. How does it work this way? Please DPTI stop buck shoving and treat these last residents with respect.