After laying dormant for close to 2 years the good wood on the Goodwood Oval Improvement Plan is it is now back on the drawing boards. Well the grandstand is. 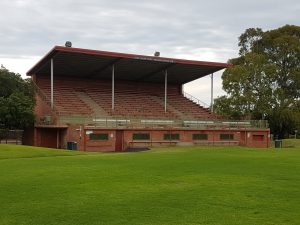 Back in 2014 we developed an improvement plan for the Goodwood Oval and Millswood Sporting Complex. The combined plan hit a snag however as we tried to resolve a conflict over use of green space at Millswood.

While we have been trying to resolve this the Football and Cricket Clubs at Goodwood Oval, along with the Goodwood Tennis Club, have been the forgotten players.

Both clubs have advised me that they require urgent works to resolve health and amenity concerns in the wet areas of the grandstand. This includes the shower facilities and their inappropriateness for females and the male club toilets (which have no ventilation). It includes the kitchen areas. They also are sadly lacking in storage space.

Mindful that supporting some works needs are urgent enough to be included in next year’s annual budget I have put a motion to Council. After considered and eloquent representations by both clubs in support of my motion it was unanimously supported I am proud to say by council.

The motion aims to ensure we have an improvement plan that is up to date and accurately represents the needs of the future. We need to do this to ensure any early works we may contemplate complement and do not contradict the plan.

We need first to update the improvement plan to recognise the emerging female participation in both sports.

The good wood on Goodwood Oval is that subsequent approval of the updated plan provides us two opportunities: