Happy New Year in 2017 Everyone

Council’s offices are open but with only a skeleton staff at this stage. I expect a number of your elected members are taking a well deserved break during this traditional time of reflection. I trust you have taken a similar opportunity between Christmas and New Years. 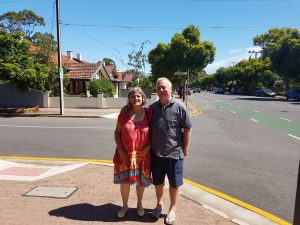 While wishing you a happy new year in 2017 I caught two of the western ward councillors enjoying their company today and good on them. Follows up from a blog last month by one of them. Seems they are quite cosy.So what were Councillor Jennie Boisvert of Clarence Park Ward and Councillor Bob Schnell of Goodwood Ward doing?

Contrary to common belief there were not in Holiday mode.  They were actually on the job, meeting with myself and Bob’s Co-Councillor Luke Smolucha. 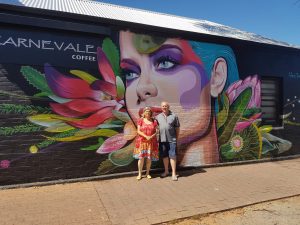 And they (we) were meeting at my local coffee drop in for a coffee, bite to eat and a chat. That is Carnevale on East Avenue. You know, the one with the new face painting on their north wall.

We felt it might be worth your while us discussing what initiatives we might consider worthy of placing before the candidates for the newly formed state seat of Badcoe (formerly Ashford) in the lead up to the next State Election.

The next State Election is but 14 and a bit months away.

We await news of who will run for the two major parties at least will we see incumbent Steph Key continue for yet another term. Will Unley’s Mayor (as widely publicised) contest the seat. Who else might put their hand up.

While we await this Jennie, Bob, Luke & I believe we should stand ready to lobby for the best possible deal we can get from whoever the next Government will be. So today we discussed some possible initiatives we could lobby for.

How about you. You could help us to make it a Happy New Year in 2017 by letting us know what you might like to have us lobby for. Indeed why not consider joining us in our lobbying efforts.