Libraries in Unley Showing the Way In both sessions families had fun in the 2 hour blocks to create and publish their own e-books using a combination of text, drawn image, photo images and sound recordings using iPads owned by families – as well as using a number of iPads provided by the library. 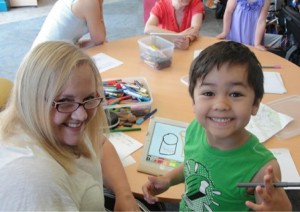 Sue Nicholls from Magill Uni – a lecturer in early literacy with a special focus on digital literacy with families worked with us and the workshop attendees in the library so that all children had the chance to publish their own books and focussed on using the App – My Story Book Maker for Kids.
Both sessions had full attendance which was great for a first off event for the library using Ipads and offering publishing – for young children.

The children definitely had lots of fun writing, drawing, making their own sound effects for their characters, and taking photos of themselves, toys and family members which became part of their stories and completed e-books.
One of the boys who attended the second session – was a keen writer and thanked us at the end of the workshop saying this was something he’d really wanted to learn, and if he hadn’t come to the workshop he wouldn’t have been able to work out all the functions – and he was so excited to publish his own books he didn’t want to leave!