Our Council Assessment Panel will feel a light tension this Tuesday night. The Panel meets on that night to adjudicate on a single Development Application.

This application has prompted a not so light tension within the local community. This means it is the only application considered on the night. 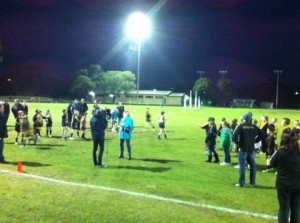 With 4 independent members and just one elected member they are appointed under the Development Act to represent Council. They must assess applications based on the Act, the Development Regulations and the City of Unley Development Plan.

On Tuesday night they must decide whether to accept or refuse a Development Application by the Goodwood Saints Football Club. The club is seeking to extend the hours of use of the lights at Goodwood Oval.

As part of the process of determining the fate of the application they have received no fewer than 150 representations. Around half of these oppose the proposed development, half support. Some of those who have provided a representation will take the opportunity to verbally present to the Panel.

The tension between the Club and nearby residents caused by this application should not deter the Panel from their responsibility under the Act. That said I imagine there will be more than just a light tension in the gallery on Tuesday night.

As they exist courtesy of the Development Act and not the Local Government Act the panel cannot be lobbied. This is unlike when Council considers an issue. Even Council can’t influence them.

When the Panel read representations or hear testimonies they must evaluate them in purely development plan terms. This is enhanced with the influence of elected member diminished to just one of five. This courtesy, of course, of the former Planning Minister John Rau.

The big question is, will they agree with the recommendation of Council’s Planning Department who believe the application is not seriously at variance to the Development Plan.