Protecting heritage and character areas is something the City of Unley has fought hard for. This was our first goal in working with the Government when they first started revising the Development Act. 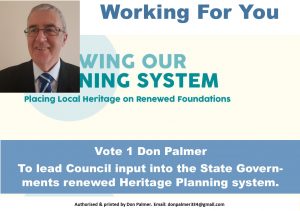 Protecting heritage and character areas was our first focus when the previous State Government introduced their wish to change the planning system. In return we guaranteed we could provide the numbers of additional housing to meet their 30 year plan.

Afterwards, the then Minister challenged the concept of character housing. The current Government appears to have a similar view to him.

They appear to have a view that demolition of local heritage buildings be by a simple merit based consideration. Considerations not much different to standard housing. Their focus right now is not only on local heritage but on character housing zones.

It appears the Government is looking to water down the provisions of protecting local heritage and character zones. They are looking to make demolition easier. They see the answer being the use of generic rules. Rules that in my opinion may work in one area but not reasonably in another, such as Unley.

The current Council has continued to lobby for protections seen as important by Unley’s community. The new Council will need to continue the fight.

The new council will need briefing as soon as is practicable. Immediately after they are commissioned in order that we can continue the fight is preferable. This whole planning overhaul is moving in a way that limits our ability to respond on behalf of our community.

The new council, in this background, needs to be provided an opportunity to understand the history, the process and the schedule going forward so as to contribute appropriately. Accordingly, I have already prompted our Management to engage the new Council immediately they are commissioned.

With the aim of protecting heritage and character areas, if re-elected, I will  continue in providing local leadership to guide the new Council through the lobbying yet to do.