Providing local leadership in Council does require an elected member to consider all the Council area, not just their own ward. I have taken a leadership role outside Clarence Park ward in a number of key initiatives. 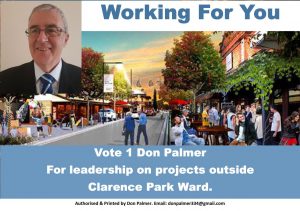 In the last 8 years I have contributed to, if not driven, many initiatives outside Clarence Park. I intend to replicate this in the next 4 years. Indeed, I have several initiatives as listed below that I particularly wish to promote.

As a small business person, I have been probably the most consistent advocate for the redevelopment of King William Road. Readers of my blog would know how frustrated I was on occasions as the media portrayed what we were trying to do was to decide on whether to keep pavers or bituminise the street. The same readers would know it is much more than that. Indeed, they would know that the final design was something I had envisaged from the time I became your councillor.

The project will commence earlier next year. It still needs strong leadership as the construction process will be challenging for traders, customers and the local residents alike.

As a member and a previous Warden of the Parish of St Augustine’s Anglican Church I am intimate with the village green. This is the lawned area behind the Church and the Council Civic Centre. It is in the heart of Unley.

I was a key driver of the paved courtyard area that separates the Village Green and the Civic Centre and Church. The courtyard is now a much used and loved area. It provides a pedestrian access from Rugby Street through to Unley Road. A lovely stroll many take advantage of.

Our last Mayor, Lachlan Clyne, thought so highly of it he used it for his wedding reception after marrying in the Church.

Like Goodwood Oval I have been integral to what has been achieved so far at Unley Oval.

The picket fencing and the redevelopment of the Jack Oatey stand I proudly have been a major instigator for. Providing local leadership is necessary to see the heritage (McKay) stand redeveloped.

I have always seen, since long before getting on Council, an Oxford Terrace that is pedestrian focused. The same as we are now doing to King William Road.

This is a project that has yet not received sufficient support from my colleagues. It has fallen  agonisingly short on a couple of occasions to get to the chamber. I will continue to fight and urge consideration of this being part of our long-term strategy.

The Unley Civic Centre remains an inward focused architecture with no reference to the surrounding streets. Now that I have been able to access the inner sanctum as it where, I can also say it is a most inefficient building.

Like Oxford Terrace, by providing local leadership, I am keen to work for you to have us continue explorations that have commenced albeit in a small way. This starts with being re-elected of course.