The time I believe is right to consider an Unley Cat By-Law. I am hearing this from rate payers as I walk the streets of the Clarence Park Ward. 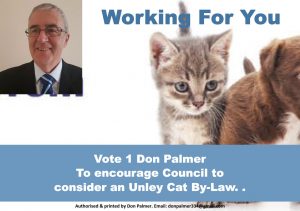 Earlier this year I represented and advocated for a solution over a cat dispute between neighbours within the Ward. I helped both the cat owner and the aggrieved neighbour negotiate with council for a solution.

The end result was, I believe, a win-win for both.

The City of Unley does not have a cat by-law. It is true we have not had many complaints about nuisance cats. We have had enough however for us to consider an Unley Cat By-Law.

The previous Government recently made changes to South Australia’s laws in dog and cat management. Changes that are being phased in over the next 12 months. These changes include new requirements for micro-chipping, de-sexing and breeder registration.

Beyond this, under the Dog and Cat Management Act 1995, local councils can introduce By-laws for the management of cats that go beyond this legislative mandate.

Such by-laws may include—

Two simple but effective measures that our whole community would surely support. We don’t need I would suggest to go any further than this.

I commit to providing local leadership by encouraging council to consider an Unley Cat By-Law. A simple cat By-Law that everyone can agree to.