Mayor Lachlan Clyne opened the Merla Festival last Sunday and it was a great success.

This was the first event by the Sikh Society of South Australia and another demonstration of the multi-cultural diversity of the City of Unley. 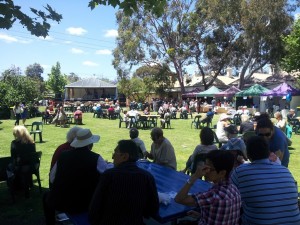 Sikhism is one of the LIVING religions of the world today, along with Christianity, Islam, Hinduism, Judaism and Zoroastrianism. Sikhism in the youngest of them all.

Sikhism is the ONLY indigenous product of INDIA. Hinduism has all its roots in the Vedic religion of Aryans who migrated to India from outside. The remaining religions above are of SEMITIC origin. Sikhism is not a mere reform of Hinduism. It has certain principles in common with Hinduism as ALL religions have but has fundamental differences which clearly define it as a separate religion.

Council Staff and elected members who attended were all of the belief that this should become a regular event on the Unley Calendar. And the Village Green proved an ideal venue.


Look out for next year’s festival and join in celebrations.