Rate Capping passes the Lower House and awaits now reaction of the Upper House. The Local Government Industry in the meantime, is assessing the Bill presented to Parliament by the Government. 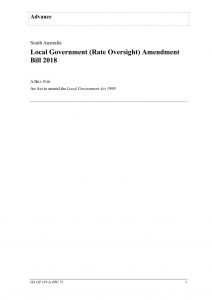 The Rate Oversight Bill which presents rate capping and which can be found here seeks to place authority in a (3rd) independent party for setting future rate increases in local government.

While it has passed the lower house, where the Government has the numbers, its passage through the upper house does not look all that promising for those keen to have rate capping. Opposing the legislation are Mark Parnell (the Greens) and Frank Pangallo (SA Best). John Darley is leaning towards accepting but is unsure. The Labor Opposition are likewise yet to determine their position, even though it has passed the lower house. In both cases I suggest they are awaiting the response to the Bill from the Local Government Industry.

Is it good policy or not. What is the view of the Local Government Industry and indeed your own local Council, the City of Unley?

We will be considering this on Monday night at a special council meeting, convened to consider this very question. I invite you to come along and hear the debate. The venue for the meeting will be the Unley Civic Centre. It will commence at 7.00pm. The agenda will be available on line from Thursday here.

There are a number of questions in my mind that concern me, particular given the evidence overseas and interstate when rate capping has been introduced. I will reveal these in a subsequent blog post. Watch this space.