Redevelopment of Keswick Barracks is not new and it remains premature.

Our Mayor was recently caught up in a public conversation about Redevelopment of Keswick Barracks. Discussions on redevelopment of this site is not new and it remains premature. 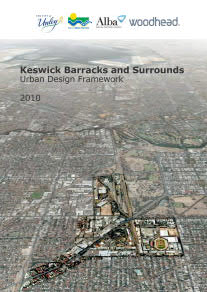 In my blog post of 21 March I indicated we were not involved with any discussions. I also acknowledged that there was some chatter at Council some 6 or so years ago.

My memory was reasonable but lacked detail.

I can now say that redevelopment of Keswick Barracks is not new and it remains premature. It was then and it is now. As I indicated in my blog post of 21 March, until and unless the Department for Defence wants to quit the property, and talk is indeed premature.

The discussion, on checking, was actually 9 years ago. As it was, it wasn’t just a casual chat. It was a formal study. A study called Keswick Barracks and Surrounds Urban Design Framework.

We finalised a discussion commenced by the previous Council to my election in 2010. A discussion that was in fact a precinct study of the area. Not just the area of the Barracks but including the (then) Le Cornu site, the Showgrounds site and across the road into the City of West Torrens, and the Interstate Railway Depot.

The study explored development potential. It also recognised the heritage value of the precinct. Heritage, both cultural and defence. In so doing, it promoted how to protect and enhance that heritage.

Work progressed through 2009 with a preliminary study and a final Urban Design Framework in 2010, presented and adopted by council in April 2011. We undertook discussions with strategic partners including a range of government agencies, adjacent large land owners and major developer stakeholders to gauge their views on the future of the precinct.

This clear framework is invaluable if opportunities do arise. We trust that if or whenever opportunities may arise in the future, that Council will be included in the conversation. Only then can we have any assurance that sensible redevelopment of Keswick Barracks can be achieved.