The State Government’s Decide & Defend Policy is still alive and well and it is hurting Unley. At least one Millswood resident is angry at Unley Council because of what has occurred with the Goodwood Junction Project.

This ratepayer is upset that the city of Unley are proposing to convert a vacant strip of land in the Millswood Sporting Complex into a Depot to support the Goodwood Junction Project as early as October (one month from now) and catch this ….. when the project is complete rather than undertake works to improve the site we prefer to seek RENT????? 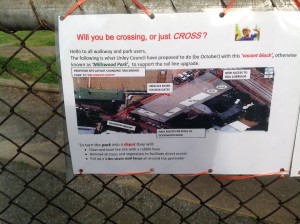 Thank you State Government. The Premier’s recent promise to stop the decide and defend policy is hollow as far as I am concerned when I read the poster on the fences at the Millswood site. The Government Department responsible for this project DPTI claim they have widely consulted but this is far from the truth based on the number of ratepayers who have spoken to me about their concerns and indicated they only found out about the project via the newsletter that Jennie and I letter boxed recently, our respective blogs or from neighbours or friends. 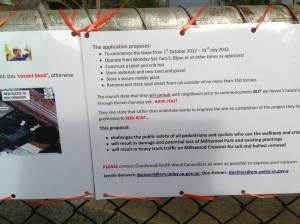 Simply……………….The Government have failed to consult and now we at Council are getting the blame because someone out there thinks we are responsible.

And I hear also that there is someone out there (maybe the same person) who wants to know who on Council is responsible so they can vote them out of office.

The 2 page notice above has referenced a development application by DPTI (Not Council) to the Development Assessment Commission to carryout excavations required for the project, construction of the bridge and other associated works.

Council, like any other interested party, has the opportunity to make representations to the DAC with concerns we have. This we are doing and your two local councillors (nominated in the notice above) have managed to win a number of concessions.

As I have indicated in previous posts on this blog the Unley Council is undergoing a Community Assets Review. The future of the Millswood Complex is part of that review.

The review is progressing well with the input of this elected member/councillor and will soon be ready to go out for public consultation on the draft findings. And there is NO suggestion to RENT that section of the site, whatever that means.

The consultation is likely to be in October.

When the results are back we then intend to undertake master planning for the site, and when complete it will go back out for further consultation on the plan. So, far from the council not consulting, we will be showing the State Government how they should be doing it.

In other words and as a member of the committee responsible for the Community Assets Review, there will be no changes made to this site without extensive consultation.

I expect to report further on the Community Assets Review soon.