A safer Clarence Park Rail Station is high on my agenda. This is one of those Advocating at State & Federal Level issues I spoke of yesterday. 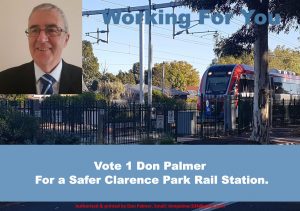 A safer Clarence Park Rail Station has already been recognised through our local Clarence Park Neighbourhood Watch. Living so close to the rail station, being a frequent user, and conscious of the safety issue I am looking to take this to the State Government.

Prior to the electrification of the Seaford (previously Noarlunga line) the station had self closing gates at all 4 entrances. In spite of the increased safety risk with the use of more silent trains nothing happened. DPTI argued back then, that safety was not an issue.

Attempts in the past with the previous Government to reinstate them were unfortunately not successful. With a new Government and with a new Council comes fresh hope. Hope that appropriate safety comes back to the Clarence Park Rail Station.

I have witnessed many train drivers sounding their horns to alert pedestrians about to step out in front of the train. They have done it to me even though I believe I was far enough back and alert to their presence.

I will work for you, providing local leadership, if you allow me to work with you to lobby for this safety necessity.