The seesaw is one of the oldest ‘rides’ for children, easily constructed from logs of different sizes. The words of “See Saw Margery Daw” reflect children singing this rhyme to accompany while playing on a see-saw. 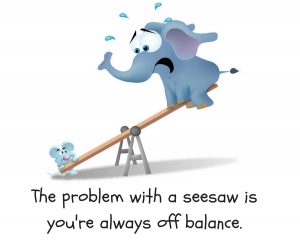 A year after the NSW Government scrapped its council amalgamations policy, the Committee for Sydney has released a report. Would you believe, a  report that is calling for the capping of council rates to be scrapped.

The report, A New Era for Local Government, calls for the end to ‘rate capping’. IPART (their equivalent of ESCOSA) sets the maximum amount NSW councils can collect in general revenue through an annual peg. It describes the annual rate peg as “a blunt instrument, with little economic rationale behind it, and which hinders local institutions on which much of our civic life depends”.

It is also calling for the establishment of a Council of Metropolitan Mayors to work alongside the Greater Sydney Commission and the introduction of a new fund to pay for local infrastructure.

Catch this, a levy on local rates to support local councils generate a pool of funds to expand and improve open space or maintain civic infrastructure, like roads and libraries or support town centre renewal. In other words, to allow Councils to catch up with their need to upgrade infrastructure.