Summary of my thoughts on the Draft Planning Bill

In this 5th post on the subject of the draft Planning Bill introduced into Parliament by Minister Rau I will summarise the thoughts I have made public in my previous 4 blogs. With luck Mr Rau might take my thoughts on board in lieu of branding me too as one of those morons who dont understand development and planning.

Planning reform IS necessary. Everyone agrees with this. Everyone’s views on this are influenced by their involvement. I wear two hats, one as a builder and one as a resident and another as an elected member. My thoughts therefore have an empathy with all who have to operate in the system. 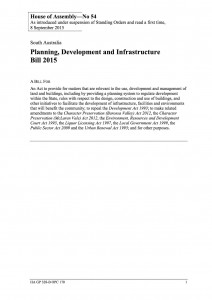 As the Bill is debated in Parliament the focus should deal with where the system needs improving. It should recognize the role everyone has to play and not focus on removing those seen as interfering with the process. Removing residents, removing councillors, indeed removing councils does nothing to help create a better system, All it does is create the opportunity for unregulated development.

Removing residents from the approval end of the process whilst understood by me fails to recognise that this is the part in the process they are best able and capable of participating in. Fixing the system will identify when and where they can contribute rather than waste their time when their involvement is not able to influence.

Removing elected members takes any potential conflict away but also prohibits those with possibly the best empathy for a street or suburb. This must surely reduce the chances of a good outcome.

Shifting focus of public participation might sound OK in principle in that it IS at the concept stage when we truly want the input of our residents. Doing so then would in theory avoid the frustration of seemingly not being heard at the end of the process. Achieving this is like leading a horse to water and expecting him to drink. He will when thirsty and that is when there is a development proposed next door.

I implore everyone in Government; the Minister and his colleagues, those in opposition, members of the Legislative Council to look closely at the changes proposed by this bill. Think hard about what issues will be created by implementing it, anticipate its flaws.

Be careful in blaming Councils as the Minister has repeatedly done. Shifting the deck chairs never has and never will solve the problem. Who will be responsible for planning decisions in the future. Minister Rau indicated back in (from memory) August last year that Councils (the Morons he referred to a month ago) are only competent enough to approve fences and carports   think it was.

The same people (paid officers) making these decisions will be the ones employed by the regional bodies making the new decisions, unless of course they are going to put out of work.