The Unley community has been pounded this week by a singular message. That terrible Council is killing King William Road. Destroying the businesses.

The focus has been consistent. Each day a new storey reinforcing the message awaits us as we get out of bed in the morning.

Amongst other claims, we have a prominent landlord in the street quoted as slamming Council for destroying the street. In addition, we have a business relocating allegedly after just one day of construction activity. A business who I understand made that commitment some 6 months ago. And then, a claim apparently on behalf of a Ratepayer Association we don’t know claiming the people of Unley no longer have confidence in the Council’s CEO. 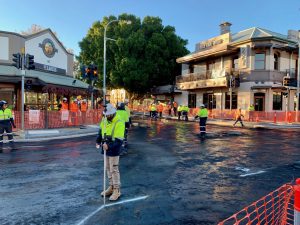 Right now, the road certainly looks like it is ground zero. It certainly does look like a bomb has exploded.

You have to ask. How could this happen? How could a Council be allowed to run rampant over its community and not consult with them or listen to what they are saying.

Do you believe this rhetoric. I hope not. How about some truth coming into the conversation to avoid the street falling over purely and simply because of the doom and gloom being portrayed.

The project was conceived because of the doom and gloom that has surrounded the street over the last (say) ten years. Many a long term business along the street have left the street during that time. New businesses have also come and gone.

The facts were clear. We needed to act. The street needed transforming. Transforming the street is precisely what we believe we are doing.

We are doing what we have been asked by our community to do. We are also doing it in then manner they requested. For details explaining this check out my next blog post, “Transforming King William Road”. Try also getting the facts from the Design King William website.