The Unley Central Draft DPA was considered last night by the Committee I chair. We considered a very in depth report from our administration and URPS, the consultants. 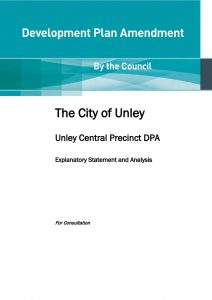 Accompanying the report was the Unley Central draft DPA. Both documents required significant reading. In my case I devoted the weekend to so doing. It is my belief the report has captured well the concerns and opinions of the public involvement to date whilst addressing the Minister’s requirements.

The report and the draft DPA can be found as attachments to the meeting agenda. This can be found here on our web site.

With strong input from independent and elected members alike the committee was quite supportive of the work that has been done. They did make a number of minor observations.

They highlighted appreciation in particular for the work done to ensure a gradual transition from existing neighbouring residential zones. The detailed work done to arrive at appropriate set backs and envelopes was appreciated.

Concerns were almost unanimously expressed regarding infrastructure needs and traffic flow. Infrastructure improvements is of course a council responsibility. A study is under way as we speak investigating this. It does not impact directly on the Unley Central draft DPA however as the DPA is purely planning.

Traffic flow was also considered in the report. It included an analysis by another consultant, Infraplan. They have made a number of observations. Once again this will be the province of council and have no direct bearing on the Unley Central draft DPA. Our independent members were supportive of the analysis by Infraplan. Elected members had concerns over such things as no right turns along Unley Road.

Council still has much work to do in these areas. The committee was keen to recommend Council pursue this. They did this by including an amendment inspired by myself to the motion (item 4 below) which was passed unanimously. The motion is below:

Now — Over to Council to endorse the Unley Central draft DPA with changes to come back to council in August. We are one step closer to public notification. I suggest this is looking like October/November. Over to council also to separately continue to pursue answers to infrastructure needs and traffic flow challenges.