Last Tuesday night Unley made a decision on Brownhill Creek. A decision in line with the other 4 councils but a decision that protects the creek owners. 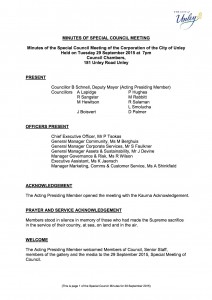 Whilst we were the last to make a decision and we took two dedicated meetings to do it we have continued with the decision made to provide leadership on the complexity that is Brownhill Creek. Way back when we backed exploring the culvert option to ease the pain of the property owners adjacent Brownhill Creek Conservation Park. We were the council promoting water harvesting back in 2012. We are the council now who is watching out for the interests of the creek owners.

Had we not made the decision we made the SMA would have had the opportunity to take over the project on the basis that Local Government had demonstrated an inability to govern such a project. With respect to the SMA they are a State Government body and the State Government has a reputation of running rough shod over residents with such projects. This is evidenced by the recent grade separation of the Seaford and Belair train lines.

The decision can be found on the City of Unley website here. Click on “Special Council Minutes 29 September 2015.  Read item 3 of the motion moved by Cr Lapidge and seconded by me (it’s the last one) to better understand what we have done that sets us apart form the other councils.