It seems every year the fortnightly or weekly bin debate recurs. This has been the storey dominating the media cycle today. So frequently what we continue to hear is it is all about cost saving. 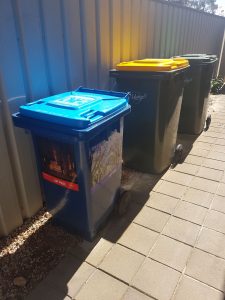 I have entered this debate frequently in the past. Each time I have advocated that the question should not be about reducing the blue bin but about increasing the frequency of the green bin collection.

Our food stuff, the smelly stuff, the stuff that attracts ants should go in the green bin. We should therefore be talking about this bin being collected weekly. Conversely the blue bin, which goes to landfill, should be fortnightly.

In other words this should not be a debate focused on fortnightly or weekly. It should be about green verses blue.

An opinion incidentally I expressed today to Channel 9 when interviewed by chance in my own street.

We believe however and are being told the blue bin contains the smelly, ant attracting rubbish. This means that we as a society are not interested in getting biodegradable rubbish away from landfill.

It’s important to note, in spite of what you may be hearing, is that the LGA does not yet have an endorsed position on waste collection frequency. Until its member councils are consulted, the LGA cannot hold a position. This has not yet happened. All it is doing is trying to start the conversation.

Based on comments however made by both the Government and the Opposition today, it appears unlikely that there is support in Parliament for changes to the current system. This means they are not interested in taking the lead in better waste disposal.