The next question I have in my mind as everyone debates the dam v the no dam everyone is what would the Brownhill Creek Dam look like?

As I attempt to answer that one the first thing I need to do is clarify that there never has been proposed a dam for this project as most would perceive a dam. A dam as most of us see it is a barrier that permanently holds water. It typically has a visually stark man made wall as the primary means used to hold the water. Do a google search and this is what you find in all the images that come up.

Is this what was proposed in Brownhill Creek (B1)? No it’s not.

From the moment I have been on Council we have been talking a retention dam. Unlike all those images on Google this is a dam that has no water in it until and unless there is a heavy rain. The theory is that we want to hold back any potential flooding by way of a barrier that allows water to flow out at a slower rate over a few days after the rain event. 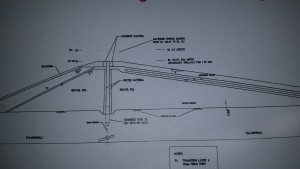 When I first studied the details provided I saw what I instinctively knew the public (and I guess a number 0f elected members) did not see.

I can tell you they told me they saw a dirty great big concrete wall.

How many people who indicate now that they are against the dam know this? It is my opinion that most people and elected members see what you see in google when you search “dam”.

Two entirely different pictures. One you can understand there being opposition to. The other I argue would not be something that any one can be reasonably opposed to on the grounds of its physical presence.

If  am right and these people understand as I do then one must ask how then would they have voted.