As expected today was great, an opportunity to be reminded why we are so lucky in Australia. Federal member for Adelaide noted in her speech at the Citizenship Ceremony that 13,000 people around the country received their citizenship. They can truly say Aussie…Aussie…Aussie.

13,000 people wanting to become one of us; to enjoy the freedoms and the style of living that only exists in the land down under. These people originated from Kenya, Argentina, UK, China, South Africa, South Korea, Hong Kong, Zimbabwe, Bosnia & Herzegovina, Sri Lanka, India, Nepal, Canada, Mexico, Iran, Ireland, Germany, Indonesia and Vietnam. 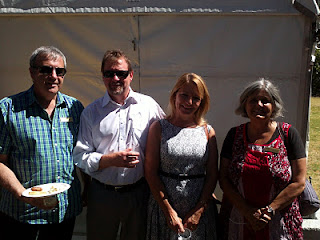 I had the pleasure and opportunity after the ceremony to speak with many of the 46 to become Aussies in Unley including Christopher Chatburn (from the UK), who was supported by his wife (would you believe) Chris. The two Chris’s, who are Goodwood South residents can be seen with me and Jennie Boisvert, my co-councillor.