A time trial for Page Park Pooches is the cornerstone of a decision taken by Council last week. This is after a well-attended community survey provided us with suggestions for better sharing of the park.

You told us about many things regarding the use of Page Park during our survey earlier this year. The most prominent was for a trial to extend the hours of off-leash during the winter months for Page Park Pooches.

Page Park is a multi-use reserve. Because it is not a large reserve this multi-use provides conflicts between user groups.

Some years ago now, there was a conflict between dogs and tennis players, particularly on a late Saturday afternoon. This was addressed when I successfully pushed for a fence to be erected between the tennis courts and the greened area.

Back then there was a large number of dogs (and their people) using the park. Particularly during that late afternoon time period. Anecdotally there are not that many anymore. Enough however to warrant taking the action we are now taking. And rather than just jump in and make what purports to be a final decision, we have opted for a trial. 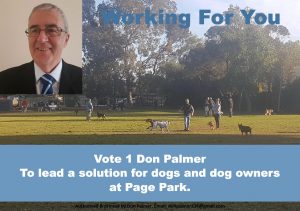 That is something I believe should have happened back when we installed that fence. Fear of all our parks being similarly treated prompted the then council to say no. I made a commitment at the last election to continue to pursue a solution. Thankfully, the current Council has responded positively.

This council agreeing to it means we will get a better feel for what might become a permanent solution. The beauty is we will again be seeking your input as to how well it worked or didn’t.

A time trial for Page Park Pooches however was not all we decided on.

You also asked us for the reserve to be lit up at night. So many of you claim you would use the park more if there was better lighting at the end of the day. We will therefore investigate the installation of movement-activated lighting.

There have also been conflicts between dogs and their owners and the dog training that is conducted at the park. The two different dog groups can and do prompt potential conflict. We will therefore review the use of Page Park for dog obedience classes. This may mean the classes potentially being shifted to a different time slot. One that does not conflict with dogs’ off-leash times. It may mean relocating the training.

As of June 2022, this is but the beginning of the journey. I look forward (with you) to having a better understanding and working toward a permanent solution. Watch this space.