Are the Trees in Black Forest Going Missing. And Clarence Park.

The saga of trees in Black Forest going missing continued yesterday with a tree in Byron Road being felled.

I found myself cutting my shopping short early yesterday. A distraught rate payer rang me concerned that a lemon scented gum on the property next door was being felled.

The third tree in the adjacent area within twelve months. The second on a neighbouring property to this resident. Changing forever the amenity of this neighbourhood. 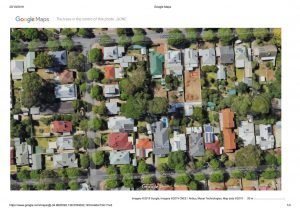 The pair of trees in the centre of this picture are both gone missing.

The two neighbouring trees, between them, were a significant contributor to the amenity of the neighbourhood. With both gone there is nothing.

I share grief of this rate payer (and others who have contacted me). A fourth tree on my side of the Seaford Line (in Clarence Park) was felled recently. A tree behind my rear boundary. Our amenity has been forever compromised as a result.

The Question has been asked, was Council responsible for this occurring?

The tree was on private property. It is one of many trees in the last decade on private land within the Unley Council that have been removed.

Council therefore was not involved. If it were a street or park tree, then obviously it would be Council.

A subsequent question raised is what Did Council Do About it?

Prior to ringing me the rate payer had rung the Council, who advised they would contact the contractor. Such was the level of her stress however, I simply had to make sure Council was responding appropriately. If this tree was a regulated tree and approval not sought, then we would need to put a stop to the tree damaging activity

I contacted our Regulatory Management, completed my shopping, deserted my wife and headed down to Byron Road. The removal of the tree was already well advanced when I arrived a short while later.

So! Was the tree protected or not? Was the felling of this tree legal or illegal?

On completing their inspection our inspection team reported to myself and the neighbour. Their conclusion was the tree was not protected under the State Government’s Development Regulations.

The species being cut down has no protection under the regulations if it is within 10 metres of a building. This tree would you believe was 9.7 metres from a building on a neighbouring property.

Does this mean the saga of trees in Black Forest going missing will continue?

Yes it will. The felling of trees such as the four mentioned in this blog post will continue to be felled, unless there is change in the State Legislation.

What can we do about it?

As I noted earlier in this blog the controls are State Government controls, via their Development Regulations. If you want change, you need to speak with your local member of Parliament.

The legislation rightfully must consider the danger the tree may present to person or property. It is however meant to protect trees from indiscriminate felling. Notwithstanding this, it often appears that too much emphasis is put on removing the tree just for the sake of moving it, or because it is simply inconvenient to the home owner.

I am happy to assist in this process.

You might also benefit from joining a lobby group, the Friends of the City of Unley Society. Their focus is the preservation of our history. That includes saving our trees. Check out their website. Fortuitously, they will be discussing increasing the green cover of Unley at their next meeting.

The other side of the storey.

But wait. There is more. There is another side of the storey. One that will play out in Council next week. I will blog on this after the Council meeting.