Please. How about a bit of Cycling Courtesy everyone, from both sides

There is a lot of angst out there still between drivers and cyclists. Both are people. I ask therefore for a bit of cycling courtesy from everyone.

Motorists have been incensed at the opportunities afforded cyclists. They believe cyclists are being given latitudes they don’t have. Not having to register their bikes and have number plates where drivers do. 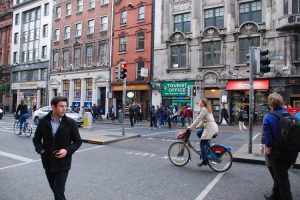 Cyclists, on the other hand, are mortified that motorists do not pay them the courtesy of being a road user with equal rights. This too has been highlighted in the media.

Governments have been criticised for their efforts to improve road safety for cyclists. The infamous Frome Road infrastructure project is still condemned today. The City of Unley has had its share of criticism when people realised that our projects might appear to favour cyclists over motorists. The infrastructure changes at the intersection of Young Street and Porter Street is an example.

This all stems in my opinion from a lack of Cycling Courtesy. A lack of respect for each other.

My message to motorists. Cyclists are people too.

Cyclists deserve the respect of being a joint road user. They deserve respect as being someone who uses a mode of transport that is not only making them healthier but helping to make drivers healthier too. They deserve cycling courtesy.

My message to Cyclists. Time too for Cyclists to respect Drivers.

A recent experience on Cromer Parade as a motorist, and other experiences lately as a pedestrian have left me with the conclusion that we all need to respect each other a whole lot more than we do currently. Accordingly that means cyclists need to start respecting motorists.

Driving west along Cromer Parade a  week or so ago and travelling at the designated speed limit I attempted to pass a cyclist travelling at half my speed in the same direction. The cyclist sped up as I started to overtake and moved to the centre of the road. This forced me to the other side of the road where I narrowly missed a collision with a parked car.

The cyclist gesticulated at me from the centre of the road as I passed. Another cyclist travelling a safe distance away in the opposite direction also gesticulated at me. Why? Perhaps for being on his side of the road for a while. Maybe because they felt I should not have overtaken the first cyclist. Perhaps I wonder because they believe they have more rights to be on that road than eye. I will never know.

Time too, for Cyclists to respect Pedestrians.

I also say too that it is time for many cyclists I have encountered in recent times to have respect for me as a pedestrian. I remind cyclists that pedestrians are also people. Like you with your experience with motorists, we are at your mercy in that you not only are bigger and travel faster (your argument with drivers) but you are also silent.

I have experienced on a number of occasions near misses as a pedestrian. All from the rear.

This includes cyclists on the Greenways path through Black Forest and along the west side of the Showgrounds.  The underpass under the Goodwood Rail Station is another such frequent location (where they are meant to dismount). There are numerous other locations. I felt the wind of a cyclist earlier this year passing me from behind on the Torrens River Bridge on my way to Adelaide Oval. A bridge some 9 metres wide and I am walking about 1.5 m from the west handrail, only to feel the breeze as a silent cyclist traveling from behind at speed passed me.

Cyclists, please recognise that you need to show the same respect as you are requesting from drivers.

My final message for all of us.

Let us all show some cycling courtesy and start respecting each other rather than bitching about others respecting us. Give respect. Earn respect.

But…. People are People.