DPTI says thank you for your patience and tolerance Free train rides through the Goodwood Junction was the feature of a thank you at Forestville Reserve today.

DPTI conducted what they called a celebration of the project and sent a big thank you to the many residents affected by the disruption to their lives over the last 12 months. There was a steady flow of people through the day, taking the opportunity to partake of a sausage and a smoothie.

Of course DPTI took the opportunity to promote the integrated transport plan on behalf of the government.

Most who attended are looking forward to the project being completed and the trains running again. As many appreciated the service that is yet to be. A number had an opportunity to alert the project management team of issues that still require resolution.

The team have indicted a desire to correct some of these, and there are some that simply wont get fixed. One they have given an undertaking to investigate is the building of a CCTV building at the corner of Arundel Avenue and Cranbrook Avenue. With some luck maybe the Minister will be asked to do what he professes he loves and that is to problem solve by extending the screen along Arundel to match the relocation of the Belair passing loop. One that wont be fixed is the relocation of the fence along Canterbury Terrace at Black Forest to assist in making that street safer for all road users. The adjacent services make this impossible. 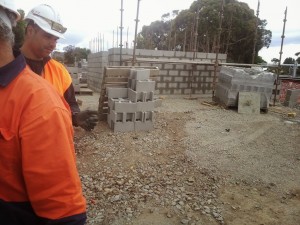 The besser block building at Cranbrook Avenue apparently was designed by the contractor and members of the management team had no idea of its size or location. The problems this creates for residents of this area and in particular the resident on the north side, western end of Arundel Avenue would be investigated on Monday was the undertaking we received.

Hopefully a solution will be forthcoming that will at least minimize if not eradicate the new visual intrusion into the amenity of this suburb.

As I took the free ride which went from the Goodwood Station to, coincidentally a spot on the track where I used to live, I contemplated the service to come and when that might be. I was advised that the diesel trains will be back up and running in December. Dont know when in December which may mean I have to find alternate transport to get to the Test at Adelaide Oval.

In my estimation, noting they could not advise me, the electrical trains are still a good 3 months away. For anyone not contacted by the DPTI public relations team all work on the line from now on will be at night. This is to provide the opportunity to test the trains on the track, both diesel and electric. It will also provide the opportunity to train their drivers in operating the electric trains.