Yes big plaudits for DPTI as their contractors reconstituted the East Avenue level crossing in a weekend. Well done but communication remains their Achilles heel.

This sign was erected to prevent vehicles turning into Parker Terrace (which runs along the rail line) from Kelvin Avenue. 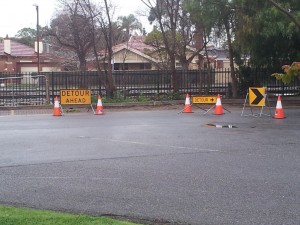 One: the sign should have been “No through road” or “Local traffic only”. Some 50 cars got to this sign, sat for 30 to 60 seconds trying to work out what it meant and then either drove down the other end of Parker only to turn around because it is a dead end or went back from whence they came. Some were quite angry and drove aggressively.

Two: the sign should have been on the corner of East Avenue and Kelvin Avenue to dissuade people from entering the area in the first place.

And yes. This is adjacent the now infamous gate 39, you know the one. The one that will not allow access to the rail corridor when you open it because there is a fence behind it.

Oh. And just to rub salt in the wound the sign was still there this morning to tell the kindy mums not to enter the street to go to the kindy on Parker Terrace, even though the intersection is now open and free to access. On the other side of the line, Canterbury Terrace, motorists are being told the road is closed ahead when it is not.

And until prompted by myself there were no signs directing pedestrians to the now open pedestrian crossing to the south side of the Clarence Park railway station.

AND THEY WONDER WHY THEY ARE NOT HELD IN GOOD LIGHT IN THIS AND SURROUNDING NEIGHBOURHOODS.

So the message I take to Rod Hook their CEO this week (for those of you knowing Jennie & I have a meeting with him) is if you want to finish this program off on a high note change your communication strategies, urgently.