Local Government leadership on waste has inevitably, in the past, been “thrown in the bin”.

Unfortunately, both this and the previous Government have ignored Local Government leadership on waste as we spruced the concept of weekly green bins and fortnightly blue bins. Until now, Governments of both persuasions have been adamant. The blue bin MUST be weekly.

Likewise, the media. They too often quickly skewed the debate to Councils just wanting to save money. 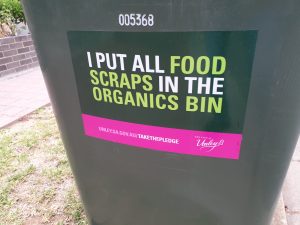 Between the Government of the day and the media, the debate was quickly “dumped”.

I made a commitment back at the last local government election to continue to provide leadership to bring about change. Change that appears now to be quite possible.

To their credit, under the stewardship of Environment Minister David Spiers, the current Government listened. A year ago, they backed pilot programs to see how the community will react to such a change in waste disposal.

The pilot being to encourage residents to put their green bin our weekly.

The Media has picked up on this in the last two days, reporting favourably on the success of a pilot program in the Holdfast Council LGA.

We too, here in Unley, recently participated in a similar 6-month trial. Like the trial in Holdfast, ours has proved a great success, diverting food scrap from landfill to be recycled as mulch for our gardens.

The trial has helped shape the recent upgrade of our Waste Management and Resource Recovery Plan 2021-2025.

A plan that includes the continuation of advocacy with the Government. Advocacy that clearly is working based on today’s media reporting.

Waiting for weekly green bin collection to become law, however, is not something to hold your breath on. This will take time.

In the meantime, I encourage everyone to show us and the government, and the media, that this is what you too want. You can do this by putting all your food scraps in the green bin. You can then let your local MP know this is what you are doing and advocate that they catch up to the “common” practice.

These trials have proved a success in identifying that waste disposal habits can be changed. But do you need to be part of a trial to change your habits? Or can you act anyway because it is the right thing to do for our climate?

In other words, I encourage you to follow Local Government Leadership on Waste, and that of your own Council here in Unley.