Have you experienced Walking Footy? I have! And I loved it.

You might well ask what Walking Footy is. It is an opportunity for those who would love to participate in the game we love, even though we may have reached or passed the age of 50.

Launched this week, the program was organised in partnership between the City of Unley, the SANFL and ECH. Council played host this week at Unley Oval to the official launch of Walking Footy.

We hosted this as part of our Zest Fest 2019. Zest Fest is a project by the Council of the Ageing aimed at celebrating longevity, challenging stereotypes and unlocking the possibilities that modern ageing brings.

Because of Unley’s involvement, I received a Walking Footy invitation to participate. I am glad I did. Experiencing it first hand I can say without fear or favour that this is a great concept. 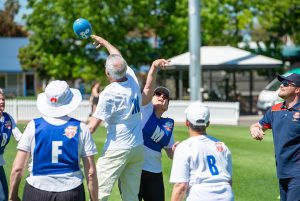 At my ripe old age, I found my competitive juices are still running high. Loved it. Loved the competition, the interaction, the involvement in team success. Yes, my team won. I would like to think I won the medal for best on ground.

And yes that is my balding head in the picture.

Although I have a few aches and pains, I can’t wait to experience it all over again. Given my history however, I might offer to pull my Acme Thunderer out of the top drawer. Yep. I still have it.

Walking Footy is a great Concept. A chance for us seniors (both genders) to be active, to regain or improve fitness, and to mix with others with a similar passion.

Two teams of mixed gender numbering six participate. Two backs, two mid-fields and two forwards. It is played on a very much shorter field, thankfully. The two major rules are:

They are hard to abide by too. Trust me. I got called up for running.

If you want to know more about it check out the SANFL website. They are organising an inaugural season to commence probably in March 2020.