The importance of local knowledge in a Development Plan Amendment

Tomorrow night we will see demonstrated the importance of local knowledge in a Development Plan Amendment (DPA).

A report from our Policy Planning Officer Mr David Brown on the Minister’s Corridors DPA will be received by Council’s City Strategy and Development Policy committee tomorrow night.

The DPA is a site specific DPA, including (in Unley) 4 sites; 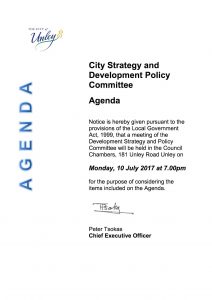 We will consider the DPA with the help of his analysis. The committee will then make recommendations to Council.  Council can then consider in to weeks times making similar representation to the Minister.

Honestly, the Minister could do with having David Brown on his staff at DPTI. David’s analysis has identified a plethora of anomalies/discrepancies in the DPA.

There are discrepancies between the DPA and Unley’s previous parameters set in our Corridor DPA. Discrepancies also indeed between this DPA and his concurrent running (design) DPA (also being considered tomorrow night).

I will be keen to hear the input of our independent members into the DPA and into David’s analysis.

His analysis should be the catalyst for quite a comprehensive representation on our part to the Minister. It is to be hoped that he takes on board our observations and suggestions, whatever they wind up being after Council considers the committee’s recommendations in two weeks’ time.

I believe the importance of local knowledge in a Development Plan Amendment will be demonstrated tomorrow night.

If you want to see David’s in depth analysis check it out here, item 9.