What do you think of the latest North-South Corridor reference design?

The latest North-South Corridor reference design is open for public review. The Department of Infrastructure (DIT) is keen to hear from us/you.

The Government (through DIT) have announced their much-awaited new reference design for the north-south corridor. This answers the questions I queried in my last blog post on this project.

On an initial examination, my take is they have listened to y/our previous observations. They have taken notice of what the various community reference groups have had to say. In particular, the reference group I was a member of.

The obvious changes, as highlighted by the Minister of Transport, Tom Koutsantonis, address very much the concerns we expressed about the loss of east-west connectivity. 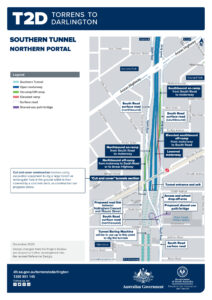 This includes by way of the removal of the Anzac Highway flyover. While improving the flow of CBD-bound traffic onto Anzac Highway, it also helps with the east-west connectivity of Glandore to Black Forest. How? By right-hand turns into South Road from Anzac Highway.

They have also addressed the concern by shifting the convergence of northbound and southbound at grade South Road traffic. Instead of occurring adjacent to Addison Road, it is now located adjacent to School Avenue Black Forest. Doing this better enables east-west connectivity via Glengarry Avenue Glandore and Addison Road Black Forest.

These appear good solutions on the surface, but they are not without the Black Forest residents paying a price. This, in turn, places challenges in front of the City of Unley Traffic Team.

I encourage you to examine the new design. Having done that I encourage you further to let DIT know what you think of the latest North-South Corridor reference design.

Now is the time to do it. If you don’t you will likely lose your opportunity to influence how the project will influence, you.

You have two options. The first is to fill out their survey. The second is to register your interest in being part of the next Community Reference Group.

To assist you, I have some thoughts that might provoke you into responding.

The number one issue raised by the previous southern community reference group was always East-West Connectivity. The changes are evidence that DIT has heard what we have said. Is it the right answer, however?

While Council is responsible for local area traffic management, is important that the corridor design does not present a challenge that cannot be solved. DIT must therefore engage with Council to avoid this potential.

If I read it correctly, I can see Glengarry Avenue and Addison Road becoming school peak hour east-west rat-running routes. Residents in these streets and Coulter Avenue will potentially be faced with traffic conditions they cannot cope with.

This is the challenge I noted early that the City of Unley’s traffic team would face. Of particular interest is the narrow street of Coulter Avenue will cope. The same can be said for the S bend toward the eastern end of Addison Road.

It is important if you live in these streets that your observations are known.

Another consistent observation has been the opportunity to provide extensive tree canopy in and adjacent to the corridor. This they addressed too. The graphics on their website look stunning.

This we need to show gratitude for. We need also to reinforce that this is maintained, if not improved upon, to avoid it slipping out of a final design.

Ensuring the stormwater running through the City of Unley’s Clarence Park ward is addressed is an issue I have previously canvassed with the Project Team. The tunnels present a potential barrier to the directing of stormwater from Clarence Park and Black Forest to the west.

This is an issue that remains unaddressed and therefore needs to be reaffirmed. An issue that can’t be left to Council to address after the fact. It needs to be considered before the corridor design is completed.

If this does not happen Council may be left with a challenge, they cannot solve. The public need to push for DIT’s experts to converse with Council’s experts to avoid this happening.

Is Emerson Crossing the missing link? Previous advice from the project team in answer to my prodding is it is not part of this project.

I ponder however the question of what the future look will be like at the Emerson intersection. With the predominant traffic flow surely now to be east-west. Would it not be appropriate to consider how to ensure good traffic flow by either of the following to avoid frequent trains causing traffic delays?

The latter solution would not be possible if the current project does not design in readiness for that possibility. The Department, in my opinion, needs to be alert to this. Plan for the future, in other words. Just in case I suggest we (the community) need to ensure they do consider it.

Previously there were four community reference groups. There was one business and one residential south of Anzac Highway and likewise north of the highway.

The Project Work Team has determined there will now be just one reference group. It will be focused on the areas immediately north and south of Anzac Highway. It will include representatives from both residents and local businesses.

Anzac Highway has been found to be ground zero. The area with the greatest impact on the local community.

This reference group will have an important role in developing the reference design into one that will be the best possible before the Department calls tenders for the design and construction of the project. It needs to work for Black Forest. For this reason, Black Forest residents and businesses need to be ready to put their hands up to represent their community.

I have registered my interest in being on the community reference group. Black Forest needs more than just me, however. I implore you to consider following my lead and volunteering too.