Mass Disobedience at an east west divide in Unley Some of my elected member colleagues have recognised an issue previously raised by me with mass disobedience occurring in defiance of a change in the traffic sequence at the junction of Park & Mitchell Streets with King William Road.

Back at the September meeting of Council I raised a concern with the change in traffic sequence at this intersection. The concern centred around vehicles turning left being given priority of vehicles travelling straight ahead —- east west. 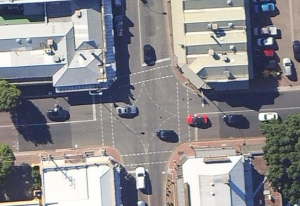 This was seen by me as yet another stumbling block in the residents of this city recognising that the western section of this City actually is part of the City of Unley.

I was going to re-raise it at the meeting last Monday as I had no indication that it had been taken on board by our administration. I was beaten to the punch however by Cr Rob Sangster, whose ward the intersection resides. 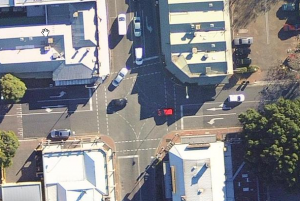 Taking the opportunity to speak however I did convey the results of my own personal survey of how long it now takes for cars travelling west ….. 4 light sequences and 8 minutes, during which time all but yours truly broke the law and ignored the turn left only arrows in a climate where no-one was turning left.

Our CEO did indicate that the administration IS looking into it which is just a swell because since the meeting a number of elected members are entering the debate in support of changing back to what worked well before the unheralded change.

As I have just said to my colleagues…… travelling west and turning south is the least used manoeuvre and it should therefore not be given the highest priority which is what has occurred as a result of the change.

PS Thanks to Cr Salaman for the photos.