Option 5 No Change A Winner Highlighting Unanimous Approval for LATM 3.

Option 5 No Change a Winner as Council unanimously supported the the final recommendations on the recent Clarence Park LATM 3. 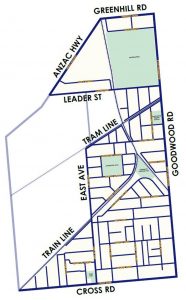 A resolution by Council that is owned by everyone. That is the result of the recent Clarence Park Local Area Traffic Management Survey LATM 3. The big news last night was: Option 5 no change a Winner.

During the debate Cr Jane Russo complemented Jennie & I on the work we personally did with you and our staff. This was unexpected, but appreciated.

The fact of the matter is we all need congratulating. You, the staff and Jennie & I. We all contributed positively to what I believe is a great solution.

A number of you identified the problems. Our staff back up your concerns with data they collected. We went back out to you to confirm we were on the right track.

Those of you who had concerns appreciated the options we put in front of you. Those who did not participate last year wondered why we were putting solutions in front of them for problems that did not believe existed. By engaging with each other, this was soon understood.

19 recommendations over the whole local area were made, one which was additional to the original list.  As a result of your input, some changes were made. Some remained the same.

Mills Street, on the other hand, will see the biggest changes. The number of approved infrastructure recommendations should make life much better for the residents of that street.

Many of the recommendations will be completed in the current budget. Some, like the two pedestrian refuges and the Mills Street infrastructure changes will require a budget bid for next year (2020-2021).

For more detailed information check out page 8 through page 108 of the agenda which can be found here.