Users of the Park would be well aware of the Page Park Turf Turmoil. In recent years the turf in the much loved and much used park has deteriorated.

This has been evident in the dormant growth season of the Kikuyu grass. 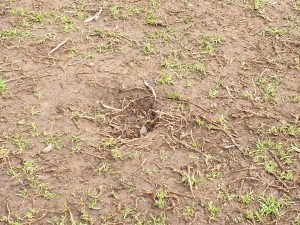 It has, over that time, deteriorated to a point that I believe requires attention. As reported back then, it prompted me to move a motion on notice in Council back in August of last year. The motion; to investigate the cause of the turf disintegration at Page Park and identify possible solutions to rectify the disintegration.

Council resolved unanimously, in favour of my motion.

I was mindful when moving that motion that Council has two pivotal reviews scheduled for 2020. In other words, the information resulting from the investigation would inform those reviews.

The first of these is a review of our Parks & Gardens Strategy. The second a review of our Dog & Cat Management Strategy. With Page Park being widely used these days for dog exercising, it is timely to investigate causes of and identify remedies for the condition of the turf.

IPOS Consulting Pty Ltd presented a report to Council at our last meeting. The report addressed the Page Park Turf Turmoil. A full copy can be found here under item 4.4 of the Council Agenda.

In essence, the report identified two major contributors to the deterioration that has occurred. The first contributor is the recent increase in use of the park during the dormant growth season of the Kikuyu grass. The second is ageing and under-performing water reticulation infrastructure.

The consultants identified a need for an upgrade of the reticulation system. For the use the park is experiencing they also recommended an increased maintenance regime. While their recommendation will give the grass every opportunity to improve they confirmed it may not be the answer.

In other words, if the quality of the turf remains an issue following an upgrade of the irrigation, use of the park may need to be considered. Accordingly, it may then be necessary to limit the times and days in which dogs are permitted to be off-leash within the park.

Finally we agreed that, until the two previously mentioned reviews are completed, we should refrain from taking immediate action. Rather than commit to increased expenditure, we will simply maintain the current maintenance.

Now we await the scheduled reviews into our parks & gardens and the dog & cat management.