The current City of Unley Council determined a very well balanced walking and cycling plan back in 2015. As the plan roles out between now and 2020 the new council will need to ensure the balance between walking, cycling and motor vehicle movement in the plan is maintained as it is rolled out.

Before the end of the term of the Council consider a new walking and cycling plan that, once again, has a good balance for the benefit of all in our community. 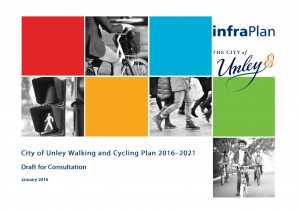 Cycling, when new initiatives are put to the public, does stir the emotions. As I indicated in my blog post earlier this year there is a love hate relationship between motorists and cyclists. There is a similar love hate relation between cyclists and pedestrians.

In that blog post I called for all of us to show respect for each other. We are all people.

When debating cycling issues, Council should consider the interests of all three interest groups. Often however we see debate skewed in as much as the only external representation to the debate comes from cyclists. If we are not careful the views of pedestrians and motorists will not given the same weighting. The result can then be that pedestrians and motorists show dismay when they hear of the plan approved by Council.

My contribution to the debate in the past has been to ensure that there is a balance in the debate. Should I be part of the next Council I commit to doing the same. Providing Local Leadership in working for you, no matter if you are a pedestrian, a cyclist or a motorist.

Clarence Park Ward will be the focus when debating early next year the Local Area Traffic Management Survey recently conducted. How cycling interacts with the other modes of movement in and around Clarence Park and Millswood, will be part of the debate.

I look forward to providing local leadership during the debate on the Clarence Park LATM.