Speculation is high that party politics have entered into the City of Adelaide elections. As a result, it is time to reflect on what has been great about local government in South Australia.

That is that our councils are filled with independent elected members not party political affiliates. Certainly, this is the way it should be in Local Government. 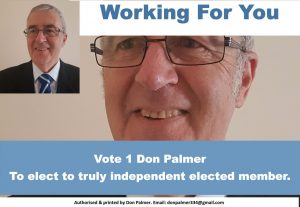 Let me start with stating that I do not have and never have had any party political affiliations.

In my 8 years on Council there has also been no evidence of party politics in the Unley chamber.

So, the members in that time did not have any party political affiliation. Certainly, if they did, it was never apparent to me.

Elected members, having said, have put their hand up for State Parliament. These members have by so doing indicated a leaning one way or another politically.

The former Mayor, Lachlan Clyne, did recently run for state parliament of the Liberal Party. His affiliation however never impacted, in my opinion, in the chamber. As Mayor, his role was limited to chairing the meetings. From memory he only ever had a vote on a handful of occasions, to break a deadlock.

We read this week that the Greens have deplored the City of Adelaide Lord Mayor allegedly endorsing Liberal affiliated candidates in their election.  So, they are apparently endorsing members of their party as candidates.

If you do, I encourage you to seek a commitment from the candidates in your ward that they are independent.