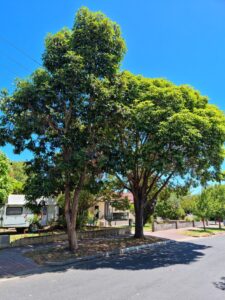 Many ratepayers have expressed concerns that these trees drop leaves all year round at a rate that is too great for our street sweeping program to keep up with. Many more are concerned about the nuts that also fall in great numbers. The latter, in volume, can be a safety hazard.

Even more are concerned about trip hazards created in paving that has lifted due to their roots.

For these reasons, there are some who would ask Council to remove the Boxes. And for good reason. Removing them however would be counterproductive. They are the second most prolific species lining our streets.

Their loss therefore would see our local government area see a significant reduction in tree canopy cover. A loss that would create other health issues centred around a warmer environment than what we currently experience.

Initially planted in the seventies to green Unley, they have become the second highest species behind the Jacaranda gracing our streets. Jacarandas account for 24% of our stock, with Queensland Box not far behind at 18%.

As readers of this blog site will be aware, Council is very much eager to ensure we have sufficient tree canopy cover as one of our strategies to combat climate change. Indeed, we are keen to meet the Government’s goal for Unley to achieve 31% canopy cover by 2030.

Should they therefore be removed the Queensland Box concerns would then be about what their absence would mean.

Council has a new tree strategy courtesy of a motion I seconded back in May of 2020.

This strategy recognises that we should limit the number of trees of any one species to avoid the potential loss of canopy due to disease. We determined that each species should be no more than 5% of our total stock.

With the Queensland Box being so dominant right now, it is clear this means we won’t be planting them anymore. This should in part address the concerns that have been expressed. It will however take some time before the Queensland Box stock reduces to 5%.

So how do we address the Queensland Box concerns in the meantime?

Council has a street sweeping program that is based on each suburban street being swept every 6 weeks. During periods of high leaf fall, this will be increased.

You may well ask, is this enough? Especially those of us who sweep the water table of our street and fill our green bins. Sometimes as soon as a day after the street sweeper has passed.

Should Council increase its sweeping frequency? Should we provide 2nd green bins where 1 is insufficient to allow keen residents to use “their” bins to help address the concern? These are questions I put back to you as either will necessitate an increase in the rates you pay to fund such initiatives.