Thank You for Your Overwhelming Endorsement

The local government election has revealed an overwhelming endorsement of my continued service by you. For this, I am truly thankful. I get much satisfaction working for you and look forward to continuing to so do over the next 4 years. 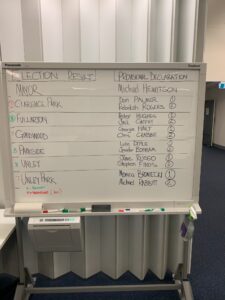 I received a call from the Electoral Commission this morning to confirm I have been provisionally re-elected. Candidates have 72 hours to request a recount, failing which the results are confirmed.

While many local government results remain unknown, the provisional results are in for both Clarence Park & the City of Unley, as a whole.

The Clarence Park results are as follows:

The provisional Mayoral vote results for those interested are:

With 4 retirements and a couple of the current team losing out we will (once again) see a Council with a significant new composition.

Clarence Park sees a change with Rebecca Rogers joining me as co-councillor.

Jennie Boisvert, of course, was one of those retirements mentioned earlier. She will be replaced here in Clarence Park by Rebekah Rogers. Rebekah’s provisional election will continue the history of Clarence Park being served by both a male and a female.

I look forward to teaming up with her, likewise introducing her to you, which I will seek to do as early as possible. I will meet with her shortly to discuss how best to communicate with you.

Subject to any recount the new team at Unley will be as follows (highest votes named first):

With Kaye Anastasiadis missing out

Once again, thank You for Your Overwhelming Endorsement.