The good news is the Electric Trains are being tested

From the Southern Times Messenger

NEW! Discover news with your friends. Give it a try.
To get going, simply connect with your favourite social network:
Facebook 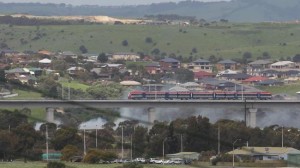 Electric train travelling on the new bridge over the Onkaparinga River at Noarlunga Downs this week. Picture: Stephen Laffer. Source: News Limited
THE Transport Department is continuing to test its new electric trains along the Seaford line.
An A-City 4000 class electric train was spotted travelling over the 1.2km Onkaparinga Valley rail bridge yesterday.
A Transport Department spokeswoman said it had been testing the new trains for the past two months to ensure passenger safety.
“The commissioning phase is required to ensure that the safety and integrity of the new trains meets the required standards, before the introduction of full passenger services in early 2014,” the spokeswoman said.
“This commissioning phase is also required to ensure the new Seaford line has all the necessary approvals in time for the launch of our first electrified commuter services.”
The first electric train arrived in the state in July and in total there would be 22 three-railcar sets on the tracks next year.
The Noarlunga line was due to open this month but has been delayed until mid-November to fix a signalling system fault .
Transport Minister Tom Koutsantonis apologised to southern commuters.
He said the government would provide free buses – costing taxpayers between $1 million and $1.5 million – and provide airconditioned buses on hot days
During the 2011-12 financial year, the Noarlunga line carried 3.135 million passengers.