You have just over one month to go to contribute to the final Unley Central DPA submission to the Minister. If you have a say in writing you can attend a public meeting to enhance your observations before council.

Two information sessions have been held. I attended both to gauge public reaction to the final draft. As the deadline for submissions gets closer I encourage you all to have a say. Don’t wait for a development near you to be proposed to express your concerns. It will be too late.

I am encouraged by the mature approach that those who attended the information sessions showed. They recognise that Unley’s approach has been to work with the Government rather than fight them. We were congratulated for limiting the impact on our community, even though concern still exists over what is proposed.

Some confusion exists still however as to why we are undertaking this process. Examples follow.

One attendee at the information sessions was critical of us because we did not get a mandate at the last Council election to carry out this DPA. He mistakenly believes therefore what we are doing is illegal. The Council actually has a legal obligation to pursue this DPA.  If we fail to do it the Minister can do it on our behalf under the Local Government Act 1999.

Of course the Government did take this to the last state election, and the previous. 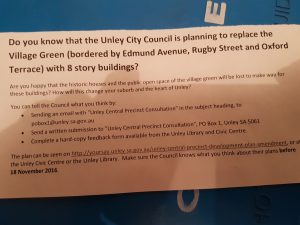 Someone else is mistakenly letter boxing a claim that council is going to build an 8 storey complex on the village green. If you are confused a DPA is NOT a proposal to develop property. It merely sets the guidelines with which future proposed developments are assessed.

Please be assured also the DPA does not propose 8 storey development on the Village Green. The Village Green is retained under the draft DPA. It could indeed be reconfigured and even increased in size.