Unley Council was briefed last night about the “no go vegetation” that surrounds the new electrification structure about to be installed along the Noarlunga (now Seaford) Rail Corridor.

With the mast installation due to commence in 2 to 3 weeks, we now have an idea of how they will interact with the existing local vegetation. Existing vegetation will be treated differently to new vegetation. 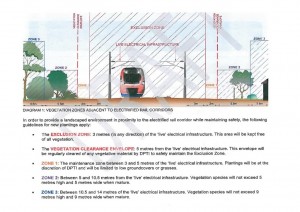 The picture above was circulated to residents a few weeks back, and whilst it is an accurate depiction of the no go zones it does not tell the full storey. The initial 3m no go zone is shown from the masts (the final location of which we will know soon, when the first public consultations planned (as per early post tonight) are held). Pegs will be located soon showing their locations.

This is appropriate apparently when the mast itself contains active wires. More frequently the outermost active wire will not be where the masts are however but adjacent if not over the rail lines.

For those who have taken an interest by observation on site you may be revealed to be advised of this. There are many trees and shrubs you may have thought threatened that are not indeed threatened.

The situation improves in that many existing trees, on a case by case basis, will receive exemptions. They will need pruning depending on how far they trespass.

This means the Sugar Gums along Cromer are safe, as are the poplars in private property opposite Cowper. And this is why the two tree substitutions proposed along Canterbury and Parker will be OK.