What can we expect from the Le Cornu Keswick redevelopment.

A drop-in session at the Gilles market hall in the showgrounds enabled many to get an idea of what is being proposed for the Le Cornu Keswick redevelopment site. 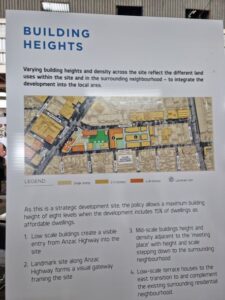 SA Renewal, Commercial Retail Group and Peet provided a collage of boards depicting everything from layout to use, from heights to motion in the precinct. Visitors to the drop-in session were provided an opportunity by placing dots on those boards to convey their thought about the different aspects of the development.

Don’t worry however if you missed out. You can explore the offerings at https://renewalsa.sa.gov.au/projects/forestville/. Better yet, scroll down the page to the various consultation/have your say links. You can take your time and explore and comment on the various concepts with the reference design.

I will be following up on my own observations from yesterday. I will also contribute on your behalf to any briefing that Renewal SA will provide Council. This, I am led to believe, will be early in the new year.

I understand further that community consultation followed by detailed concept designs will occupy 2023. Perhaps leading to a development application late in the year. That will, of course, prompt another round of community involvement.

Commencement of construction, it would appear, might be possible in 2024. The layout would suggest the construction of the Le Cornu Keswick redevelopment site would be in three stages, taking at least two or three years.

Issues, as I see them right now, centre around traffic flow. This has been an issue with local residents of Forestville since redevelopment was mooted. 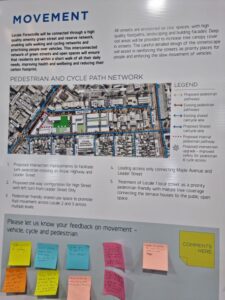 They have created multiple entry points in the site both to at-grade parking and to the some 600 car underground (two levels) carpark. This will assist in accommodating the parking. I am far from convinced that traffic flow will be solved. This I will raise at any briefing they may have with the council.

Height might also be an issue in that they are proposing some sections of the site to have up to 8-storey buildings. Given Council promoted a maximum of 6 when they worked on a development plan for the Minister a few years back.

While they have earmarked 30% of the site for open space, I found no reference to tree canopy. This will be one of the first questions they will be prompted with when briefing the council. This I told them forcibly. They acknowledged and realised this would be so.